The People, Places, and Principles of America 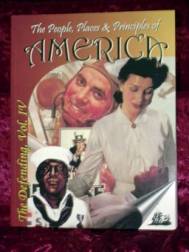 This United States History series offers a definite alternative to all the other choices. It is designed as a two-year program, presented in four volumes—two per year. Development of this series was spurred by Dr. Ronald Johnson who has worked extensively with at-risk youth. He says, "...too many novels and textbooks leave kids pessimistic about options in life. Many school books...fail to counteract negative influences against youth." This series strives to restore "...moral values, positive role models and life principles that characterized the positive people who carved out the American dream." A Christian moral base is evident throughout the series. Religion is treated as an important part of our history. Protestant religious developments and influences are given due recognition. The tone on religious issues is factual rather than preachy, although it becomes more clearly "partisan" in the last volume.

The political perspective is clearly conservative; views on limited government, failure of the Welfare State, support for original intent of the second amendment, a pro-life position, and a positive outlook on the growth of industry and technology make it highly unlikely these books could ever be approved for government schools. The Constitution and Bill of Rights are considered important enough to be included. In addition, there is a four-page section explaining each of the Articles of the Constitution.

The series also manages to present the multicultural influences that are part of our heritage. Indians, Blacks, and women all receive appropriately-proportioned coverage. The reason this series manages this better than others is that there are a total of almost 1,000 text pages in the four volumes. This allows for full coverage of major events plus decent coverage of the minor.

I think this series does an extremely good job of presenting in-depth information in a fashion that the majority of homeschoolers will find agreeable. It does present conservative positions, but it does not "bash" others in the process. It tries to focus on the positive and encouraging for young people to emulate.

Illustrations are black-and-white, mostly clip-art, which means the books are less appealing in appearance than typical texts. But the content more than makes up for this deficiency. The writing style is excellent. Topics are covered in enough depth to be interesting.

"Life Principles" are included as important elements in every section. Life principles are quotes, proverbs, or sayings that are motivating and uplifting. Each reflects upon a person, event, or theme from the section. While none that I noticed mentioned the Bible as the source, some from the Old Testament are described as "Jewish proverbs" and others are merely restatements of Bible verses. Others are quotes such as George Washington Carver's "Human need is really a great spiritual vacuum which God seeks to fill." Or the anonymous contribution, "You can change your destiny anytime you want to begin meeting the needs of other people." I suspect roots for the Life Principles might be Robert Schuller's "Positive Thinking" and Bill Gothard's "Basic Life Principles." Life Principles are expected to be learned along with lessons and are included in quizzes.

This series is designed for independent study. Each of the volumes has a companion Activity Book that includes lesson activities plus chapter tests and section quizzes. A single answer key covers everything in all four books.

Students are instructed to read the lessons then complete the Activity Book lesson for that section. These are simple-answer factual questions presented in a variety of formats. Section quizzes are provided at the end of every five topics and a chapter test after 15 topics. No essay questions are included, so you will have to create your own if you consider them important.

Some activity questions are marked with * or underlining. Students who struggle might be asked to complete only questions marked with the asterisk. Underlining indicates questions that will show up again on quizzes or tests to focus study and review. Students are also accountable for vocabulary words that are presented at the beginning of each topic and bolded in the text. Reading level and content make these appropriate for junior high or high school. All four books might be completed in one to two years. The publisher suggests using the first two volumes in eighth grade then the second two in ninth.

You can purchase books individually or the entire set of four texts, four activity books and the answer key.