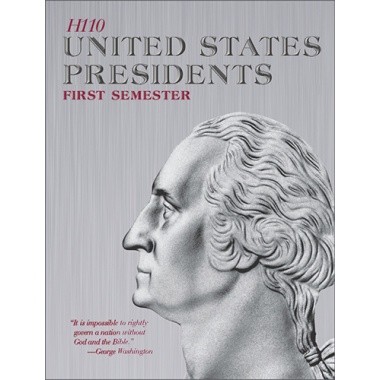 United States Presidents is a year-long course that teaches about all of our country’s presidents up through Donald Trump. It is intended to be a second-grade history course, but I think it will probably work better for third or fourth graders who have already had an introduction to U.S. history. I say this because some questions might be too challenging and the vocabulary sometimes seems beyond second graders. Also, students who have already studied at least some of the main events of U.S. history will have some context for understanding the presidents, and few second graders have had the opportunity to acquire that contextual knowledge.

The course teaches about one or two presidents per week in chronological order. The lesson on each president includes background information on their heritage and upbringing, information about their family, key events during their presidency, what they did after serving as president, information about their religious beliefs and practices, miscellaneous notes, a famous saying of theirs, and an important quotation from a speech or their writing.

The text is interspersed with questions for students to answer, with the format of the questions varying from lesson to lesson. Response formats include matching columns, filling in blanks, identifying true or false statements, writing definitions, ordering events, and writing short-paragraph responses. Questions requiring short-paragraph answers seem more appropriate for children with better-developed writing skills. For example, a question on page 17 of the First Semester book asks, “Do you think John Adams was proud of his son for becoming President of the United States? Why or why not?” (Questions like this that require longer answers show up frequently in the first semester of the course, but there is only one such question in the second semester.) You might use these questions for discussion rather than requiring written responses if that seems more appropriate.

United States Presidents clearly advocates a politically conservative, Christian viewpoint. For example, in the lesson on Franklin Roosevelt, it talks about his expansion of government programs and the opposition from those who believed in limited government. Even more pointedly, in the lesson on Lyndon B. Johnson where it discusses his creation of more government-funded programs, it says, “It seems like a nice idea to help people, but when the government has to take money from people to help other people, it gives them much power and they do not manage it very well. It is better to let people who earn their money be free to spend it and share it the way they choose” (Second Semester, p. 65). Treatment of recent presidents clearly reflects this conservative, limited-government point of view as well. In addition, when a president’s policies or lifestyle contradicted his own church affiliation, the lesson points that out.

United States Presidents makes a personal connection to history through this biographical approach, a feature often lacking in history textbooks that downplay personalities and beliefs. Parents who share the religious and political views of this course will be likely to appreciate this support, but it will not be a good choice for those with other viewpoints.