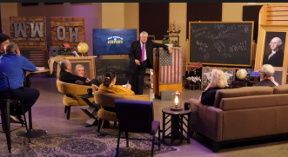 Larry Schweikart, co-author of A Patriot’s History of the United States and A Patriot’s History of the Modern World: Volume I and Volume II, is the author and presenter for the Wild World of History online courses. These video-based courses for teens and adults also use the books he has co-authored. The Wild World of History series title reflects Schweikart’s penchant for storytelling that brings history to life. He loves to tell stories of little-known but influential events such as how spies for the abolitionist movement transitioned into another type of spy by doing background checks on people, eventually becoming Dunn and Bradstreet®—one of our modern-day source for business credit scores. Schweikart also enjoys relating ironic stories such as the origin of the Democratic Party as a pro-slavery party just prior to the Civil War.

Schweikart wants to give his audience enough information to grasp underlying motivations, the impact of ideas, political plotting, and unintended consequences that have shaped history. Because of this, there are both more content and more stories in his courses than in most courses for either high school or college. Even so, Schweikart's lively speaking and writing styles make it easier than you would think to cover so much material. While students in about tenth grade and above should be able to complete these courses, adults are likely to find them interesting as well. I would compare them favorably to courses offered by The Great Courses Plus. (I have reviewed some of their courses such as The Foundations of Western Civilization and America's Founding Fathers.)

In American History Part I, Schweikart makes it clear he is promoting a particular view of history—a Christian and patriotic view that advocates the idea of American exceptionalism. As he explains, the concept of American exceptionalism is based on historical observations that the United States developed a ”unique and distinct character far different from the European nations the inhabitants had left” (p. 41, A Patriot’s History of the United States).

While you purchase both parts of the course up front, you will receive a separate bundle for each part. Each bundle includes access to video lectures, a teaching guide, a student guide, a file of maps and slides, and tests with answer keys. Students will also need the course books, A Patriot’s History of the United States (PHUS) and A Patriot’s History Reader, which you need to obtain on your own. (New and used copies are readily available through Amazon.) These two books are also used with American History Part II.

American History Part I is presented in ten lessons in both the teacher and student guides that correspond with the first ten chapters of PHUS. Each lesson will take a number of days to complete. There is one lecture for all except the fifth lesson, which has three. In addition, students read a chapter in PHUS and answer questions in the student guide.

Schweikart presents the lectures before a small audience of adults on a stage set decorated with lots of interesting props. He’s an entertaining speaker, and you can tell that he is enlivened by the presence of an audience and their reactions.

Lectures vary in length from 22 minutes to just over an hour. Students can watch these in one sitting, but the longer lectures might be watched more profitably in two or three sittings. Each video covers two or three topics, and these make natural breakpoints where students might stop watching if they prefer shorter sessions.

In the lectures, it is clear Schweikart knows his subject so well that he often speaks without reference to his notes. He tells stories and makes connections that bring the subject matter to life. He uses humor and even sings a line from a song once in a while to illustrate a point.

The 125-page student guide has an average of about 12 pages per lesson. Aside from an introductory page for each lesson, the rest of the pages present essay questions with lined space for students to write their responses. The questions challenge students on many levels of thinking, requiring comprehension, analysis, and synthesis. A good example is a multi-part question at the end of the first lesson that asks, “What was the Glorious Revolution? Why was it so 'glorious'? What impact did this English revolution have in America?”

Because of the way questions are worded, you can tell that some of them are intended for discussion rather than written responses. For example, one question reads:

Students might be asked to discuss why, say, Africans or Middle Easterners were not exploring these areas [in the New World]. A good out-of-book exercise would be to find out what happened to China’s "golden fleet," which ended their exploration (Lesson 1, p. 2).

The "out-of-book" exercise will send students off to research the golden fleet before they can participate in a discussion.

“Learning at a Higher Level” questions are interspersed with other questions and should be considered optional. These often require students to read primary source documents included in The Patriot’s History Reader. For example, a question on page nine of the first lesson reads: “Using the Mayflower Compact, discuss the Pilgrims’ attempts to reassure the King that they were not being rebellious.”

Students need to watch the lecture, read the corresponding chapter from PHUS, and read any required primary source documents before answering these questions. Reading assignments in PHUS are not specified in the student book or teacher guide, but they are mentioned at the beginning of each of the videos.

The teacher guide presents course objectives, suggests supplementary videos (clips, documentaries, and movies), lists the questions students need to answer, and concludes each lesson with suggested activities. The activities appeal to different learning styles and might include craft or building projects, research, writing, cooking, art, role-playing, or field trips. The teacher guide does not have suggested answers to the questions. This is probably the only weak spot in the course since it requires parents or teachers to be familiar enough with the material in both lectures and books to be able to both discuss some questions and evaluate written responses for others. Even though there is a significant amount of material to get through, it is so interesting that parents are likely to enjoy learning along with students.

Three tests are provided for the course. Each test has multiple-choice questions, a “documents-based” question (using either a document from The Patriot’s History Reader or a document included within the test), and an optional essay question. An answer key follows each test.

This American History course reflects Schweikart’s opinions. As he explains in a free ebook he offers on his website, How to Teach History, there’s no such thing as a neutral presentation of history. For instance, Schweikart’s repeated rejection of southern states’ justifications for the Civil War based on states’ rights makes it clear that he views them only as veiled defenses for slavery. It is fair to say that this course avoids neutrality more than most history courses and is all the more interesting for that approach.