Adventures on the American Frontier Series 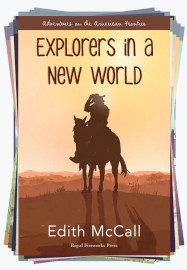 Edith McCall wrote a number of books full of lively stories from American history, but, as often happens, those books went out of print. Royal Fireworks Press has republished 15 of her books with some significant changes under the series title Adventures on the American Frontier. On the back of each title page, they say that the books have been “substantially edited, revised, and updated to retain the spirit of the original work but with a modern understanding of historical events and a more sensitive awareness of human equity.” I haven’t read the originals, so I can’t compare, but I think modern readers will find that this series does a great job of both relating the stories so that children learn a great deal of history and including the contributions and tribulations of native Americans.

The title of the series might make you think it is only about westward expansion, but it actually covers a much broader span of American history, beginning with the early explorers of the New World and continuing up through the nineteenth century.

Each of the 15 books presents a number of stories based on a theme. The books do not follow each other in chronological order. For example, the first book in the series, Explorers in a New World, relates ten stories about explorers. The stories begin with Christopher Columbus and other early explorers, then they jump to the 1600s with stories of the French explorers Jacques Cartier and Samuel Champlain and the English explorer Captain Henry Hudson. The timeline then shifts to the 1800s with stories about Meriwether Lewis, William Clark, Jim Bridger, Jedediah Smith, Kit Carson, and John Fremont.

The First American Colonists has only four stories, and they take place over only a little more than a century. The first story tells about the competing French and Spanish settlements in Florida, the Roanoke settlement whose inhabitants mysteriously disappeared, Jamestown and John Smith’s role in its survival, and the Mayflower Pilgrims and their settlement at Plymouth.

The books range in length from 68 to 130 pages, and they each relate four to ten stories. The fifteen book titles are:

The books are not written with a controlled vocabulary. Children in about fourth or fifth grade should be able to read most of the stories on their own, albeit with some help with the pronunciation of some names of people and places. The series is great for reading aloud with children across a wide age range, probably starting the series with children around age eight. I enjoyed reading the books as an adult, and I found myself learning about events of which I’d never heard. So reading the books aloud with the whole family can be worthwhile.

The books do not cover all events in U.S. history. For instance, the American Revolution is the main event only in the story “George Rogers Clark Fights the British for America” in Resolute Men of the Illinois Country.

The stories are often about lesser-known but important events that influenced history. Many stories about famous people are not the usual tales we encounter. For example, we read about “Abe Lincoln, Trader” in Pioneer Traders rather than a story about his presidency, and we meet Paul Revere in Mail Riders in a story that tells about his ride from Boston to New York with news about the Boston Tea Party, a year and a half before his famous midnight ride.

Each of the fifteen books is also available as part of Royal Fireworks Press’s Dyslexia Series. These versions of the Adventures on the American Frontier books have been carefully designed to be easier to read for those who struggle with dyslexia. The Dyslexia Series publishes every story within each of the books listed above as a separate book. That means there are three to ten books for every book in the regular series. While the regular series books are the size of half a page, the Dyslexia Series books are the size of a full page. The large, sans-serif font used for the text in the Dyslexia Series should be easier to decipher. Lines are double spaced to make it easier for readers to keep their place. In addition, about every other page has a QR code that you can scan to quickly pull up an audio reading of those pages. This allows struggling readers to listen as they follow along in their book.

The selection of stories and their themed arrangement makes this series a great supplement for the study of American history rather than your core resource. And children might like to read the books purely for their own enjoyment rather than as assigned reading.