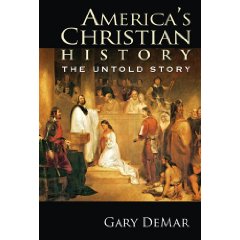 In America's Christian History: The Untold Story, Gary DeMar presents the case for describing America as a Christian nation based upon a wealth of historical evidence. He traces that evidence from the founding of the first colonies, through written works, the establishment of Christian universities, national pronouncements, physical evidence, and the lives of our presidents. He also investigates the Christian foundations of a number of the states. He deals with the controversy over the Treaty of Tripoli, the idea of Separation of Church and State, and misrepresentations about Jefferson, Washington, John Adams, and Lincoln. This edition also covers Thanksgiving, theocracy and democracy, and Christopher Columbus and the Flat Earth Myth. DeMar's long-time involvement in studying the issue enables him to define his terms and address the arguments clearly and persuasively. His use of numerous quotes and footnotes make this an excellent resource for researching topics without becoming overwhelmed.