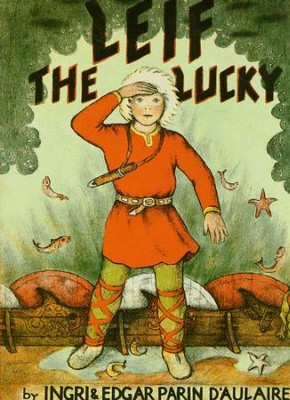 I rarely review historical biographies, but I’m making an exception for the award-winning biographies written and illustrated by Ingri and Edgar d’Aulaire. Although the originals were first published in the middle of the twentieth century, most of these books have continued to be reprinted by various publishers ever since—a testimony to their outstanding quality.

To create these historical biographies, the d’Aulaires weave together selected stories from the lives of their subjects. The authors teach children a great deal of history while fleshing out characters with constructed dialogue and conveying action scenes with both words and illustrations. While some of the historical events could be disturbing to some children, they are presented in such a way that you can safely read these books with most children.

The books are heavily illustrated with both black-and-white and full-color illustrations that are uniquely charming. These books are lovely to look at, and the content is equally delightful. They are perfect examples of what Charlotte Mason would call “living books.” The writing style is lively and engaging rather than overly simplified for children, yet young children will easily grasp the stories.

Leif the Lucky relates the story of the Norwegian explorer who lived around 1000 A.D. The book begins with his childhood in Greenland. We learn about his later journey to Norway where he met King Olav who convinced him to convert to Christianity. Leif left with the king’s charge to “take the Christian faith to Greenland,” along with the king’s friendship and many gifts. Blown off course on his attempted return to Greenland, he ended up in Vinland where he and his fellow travelers stayed for some time. However, the Viking settlement there turned out to be temporary since the Native Americans seemed too big a threat. So the settlers packed up and returned to Greenland.

Children will learn much about the Vikings through the story and the illustrations.

Columbus tells the story of Christopher Columbus from his childhood to old age. It’s fairly well balanced in that it addresses his religious motivation, his courage, and his perseverance while also acknowledging his failings. Children will learn the very mixed tale of Columbus’s journeys and his encounters with the natives. They also learn about the corruption and evil caused by many of the early explorers and the political maneuvering that undermined Columbus.

Pocahontas tells the story of the Indian princess, her friendship with Captain John Smith, and her critical role in helping the Jamestown settlers to survive. It also tells of her kidnapping by another English sea captain, her marriage to John Rolfe, and her journey to meet the king and queen of England.

In this biography of Benjamin Franklin, we learn that even as a child he was both clever and prideful. He was serving as an apprentice to his brother when he decided that he would be able to do more if he could be out from under his brother’s control. So he ran away. Through hard work, intelligence, and determination, he became very successful. Along the way he started a library, he helped organize the first volunteer fire department in the colonies, and he invented helpful things like lightning rods and the Franklin stove. He was sent by the Pennsylvania colony as an ambassador to England, but he learned that peace with England was not possible. Joining the resistance against the English king's oppression, he became one of the signers of the Declaration of Independence. He served as our first ambassador to France during the revolutionary years, then signed the U.S. Constitution. The d’Aulaires’ Benjamin Franklin manages to condense this amazing man’s life into a very readable book that adults will enjoy reading along with their children.

Almost half of the d’Aulaires’ George Washington relates stories of his childhood. After telling of childhood events, the stories continue with his surveying job and how he was drawn into fighting in the French and Indian War. There, he proved his prowess leading men in battle. He married and settled at his home at Mount Vernon for a number of years before he was called to lead the American army during our revolt from England. His character as well as his performance during the war made him the obvious choice to be our first president. Note that Beautiful Feet Books’ Rea Berg adds some interesting comments at the end of the book regarding the anomaly of such an honorable man owning slaves.

Buffalo Bill begins with young William Cody growing up on the plains of the Kansas Territory not far from the Oregon Trail. The hard life he lived taught him many skills, as did many of his young Native American playmates. At age twelve, he took on an adult job with a wagon train. His fast and accurate shooting skills put his services in high demand for protection against Native Americans. He was so busy with his responsibilities that he was a young man before he finally learned to read and write. He worked as a Pony Express rider and an army scout, but he had his own ideas for making money. He failed at a real estate venture but found buffalo hunting profitable since he provided meat to the railroaders. He became famous when a writer decided to write dime novels about his exploits. Cody capitalized on his fame by creating his Wild West Shows in which he performed throughout the United States and also in Europe.

Abraham Lincoln, a Caldecott Medal winner, was republished in 2015 by Beautiful Feet Books as a 75th Anniversary edition. The original book was printed in five colors using stone lithography, a process rarely used today. Beautiful Feet Books obtained permission to use the original 1939 lithographic prints so that their 75th Anniversary edition could be as beautiful as the original. While it looks very similar to the original, some minor editing and revisions were done by Rea Berg.

The d’Aulaires’ story covers the life of Lincoln from his birth through the end of the Civil War, concluding before his assassination. The story stresses virtuous character traits. For example, although the bankruptcy of Lincoln’s store in New Salem could be attributed to his partner’s mismanagement and laziness, Lincoln accepted responsibility. The story tells us, “Abe’s father had taught him: ’If you make a bad bargain, hug it all the tighter.’ So instead of running away Abe stayed and toiled to pay back all the debts.”

Wings for Per differs from the other books in this series since, rather than being a biography, it is only loosely based on the story of Per Bugge, a nephew of Ingri d’Aulaire. The story tells of a boy who grows up wanting to fly. His country is attacked and conquered by unnamed enemies. Per becomes a pilot who eventually helps defeat the enemy.

Per Bugge’s real story is summarized on two pages after the end of Wings for Per. The story Wings for Per parallels many events in the real Per’s life. He grew up in Norway and eventually joined the Norwegian air force. After Germany invaded Norway, Per became part of the underground resistance.

Please consider purchasing directly from the publisher through our affiliate links to help support this website.