How We Crossed the West: The Adventures of Lewis & Clark 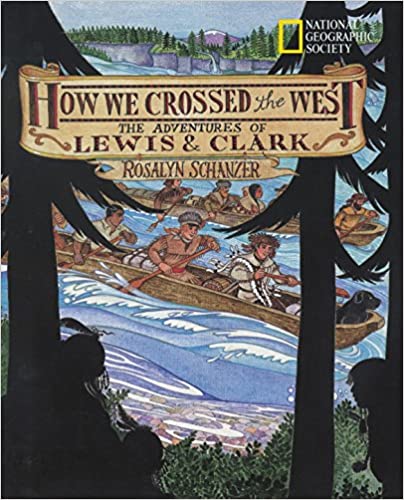 How We Crossed the West: The Adventures of Lewis & Clark is an example of one of the best ways for children ages five to ten to learn history. It uses primary source material, yet it presents the material with illustrations and text that is interesting and easy to understand.

Author and illustrator Rosalyn Schanzer draws on the actual writings of Meriwether Lewis and William Clark for all of the text in this book other than her brief introduction and her descriptions of some of the other participants in the adventure. And she identifies whether Lewis or Clark is the writer for each section with small initials. She has excerpted small portions of their writing, simplifying and updating the language so that it is easy for even young children to understand.

Schanzer has selected material that tells about the geographical and seasonal challenges faced by the explorers, and she also includes many segments that describe interactions between people, including those between the expedition and the Native Americans they encountered.

The text is nested within full-color illustrations that fill every page of this 41-page book. The illustrations are full of interesting details and add to the story.

Here’s one example. On page 13, part of the text reads, “The next morning we went on shore with the chiefs, who appeared to make up and be friendly. The pipe of peace was raised and they put before us the most delicate parts of a dog which they had been cooking. Sioux think dog a great dish, used on all festivals.” It goes on to tell that the Indian women, carrying war trophies and scalps, then did a war dance while the men beat on a tambourine. The illustrations include one of Lewis and Clark dining with an Indian chief, another of two women dancing, and another of Lewis’s dog who appears to be unhappy about the dinner menu. Throughout the book, Schanzer adds touches, such as the dog’s forlorn expression, that help to balance the very serious difficulties that the explorers encountered. She mentions these difficulties without dwelling on them or creating a sense of peril that would frighten children.

At the end of the book, Schanzer concludes with a brief summary of the return journey and a list of the expedition’s major accomplishments.

Even though How We Crossed the West was written for children, all ages should find it delightful.

How We Crossed the West: The Adventures of Lewis and Clark