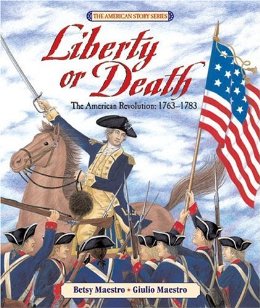 The American Story Series was written by Betsy Maestro and beautifully illustrated by her husband Giulio with many full-page illustrations. There are six books in the series:

The Discovery of the Americas (Prehistory through the age of Columbus)
Exploration and Conquest: The Americas after Columbus 1500-1620
The New Americans: Colonial Times 1620-1689
Struggle for a Continent: The French and Indian Wars 1689-1763
Liberty or Death: The American Revolution 1763-1783
A New Nation: The United States-1783-1815

As you can see from the dates and descriptions in the subtitles, this series provides chronological coverage if used in sequence. Each book is 48 pages in length except Liberty or Death and A New Nation, which each have 64 pages. Books include some additional information in the back such as brief descriptions of other key events or brief biographical information on key people. The text takes up space about equivalent to one-third of each page, sometimes overprinted on an illustration. There is less text in the first book than in the rest of the series.

These should be great read-aloud books for children ages seven to ten or independent reading books for about third or fourth grade and up. The Discovery of the Americas seems suitable for a slightly younger audience than the others (perhaps first grade), so it makes a great starting place both chronologically and developmentally. The other books in the series seem to gradually become more difficult. I would use the last two with students in at least third or fourth grade.

The outlook is secular, so there might be minor content problems. The Discovery of the Americas states, "No one knows exactly when the first people arrived in the Americas, but it was probably at least twenty thousand years ago." So some families might take issue with that chronology. On the other hand, this same book discusses other purported explorations or visits to the Americas prior to Columbus that are often neglected in introductory history presentations for children.

In Exploration and Conquest, there are passages such as this:

Large expeditions of soldiers, called conquistadores, were sent out to claim land and riches for the king and the Church of Spain. With them went priests who tried to force the native people to accept the Catholic faith. However, these people had their own strong beliefs and often had no idea what the Spanish were trying to teach them (p. 8).

In the above example, the conquistadors were driven by numerous motives beyond the search for riches as the passage states. When the books address religion, they sometimes twist things. There was no "Church of Spain" as mentioned in this passage. Most (if not all) were Catholic, and the Catholic Church is worldwide. In addition, while forced conversions were sadly a reality, this statement makes it sound like there were never any true conversions, which is false. In The New Americans, too, there's a slight and subtle slant against Christianity evidenced by the frequent mention of intolerance and religious conflict without balancing any positive influences or effects.

I was able to read the complete books of The Discovery of the Americas and The New Americans, and only what I could preview of the others, so I did have limited access to the content of some of the books. Generally, the content is interesting and well presented. The books reflect a secular viewpoint although I do not think it problematic enough to discourage conservative, Christian homeschoolers from using them as long as this isn't your only coverage of early American history.

You might also want to check out the Maestro's book, A More Perfect Union: The Story of Our Constitution. This actually follows the last of the American Story series volumes chronologically although it's not part of the series. It should be suitable for children about first grade and up. This book is among those used with Beautiful Feet Book's Early American History Primary Study Guide.

A More Perfect Union: The Story of Our Constitution

Discovery of the Americas