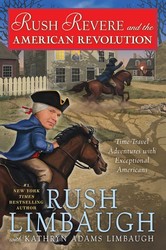 Well-known talk radio host Rush Limbaugh shares his love for the United States of America through this series of four chapter books written for young people. The main character is Rush Revere, a history teacher who dresses in colonial period clothes and is prepared to take off on a time travel adventure at a moment’s notice. But he is dependent upon his “magical” horse Liberty, a horse that talks, can turn invisible, and can travel through time. The first book, Rush Revere and the Brave Pilgrims, lays the groundwork and explains Liberty’s special abilities, so you definitely want to start with that book.

Three young people, Cam, Tommy, and Freedom, catch on to what is happening and end up joining in on the adventures to learn history first hand.

In Rush Revere and the Brave Pilgrims, Rush Revere travels back to Holland to join with the Separatists as they prepare to begin their journey to America. He and his companions experience the dangerous ocean voyage and the challenges and successes of the settlement at Plymouth as they meet up with William Bradford, Myles Standish, William Brewster, Squanto, Samoset and other important historical characters.

At the beginning of the second book, Rush Revere and the First Patriots, Rush appears at a demonstration and is immediately suspected of being a Royalist. His horse, Liberty comes to his rescue as he does frequently in these stories. On this adventure they also meet up with patriots such as Sam Adams, Benjamin Franklin, and Patrick Henry.

In the third book, Rush Revere and the American Revolution, they travel back to the early days of the revolution, beginning with the two lanterns lit in the Old North Church to signal the direction the British soldiers were traveling. They visit the battles at Lexington and Concord, the first of many battles that would stretch for eight long years. They also meet George Washington and visit the battle of Bunker Hill and the signing of the Declaration of Independence.

In each book, Rush Revere and his companions jump back and forth across time frequently, interjecting present day life events as well as additional history storytelling that Revere does in his role as the history teacher. All of this is woven together fairly well as long as you accept the implausible magical horse’s abilities. (Since young people today eagerly follow the tales of super heroes and others with special powers, a magical horse doesn’t seem all that absurd!)

The stories are well written, and they have already proven to be very popular with young people. I would guess the prime audience would be about ages nine through twelve, but even teens might enjoy them. A great deal of surprisingly detailed history is woven into the stories, so they serve well as vehicles for covering the colonial and early revolutionary periods of U.S. History. In addition, themes of patriotism and appreciation for our country run throughout the books, and the third book adds a modern day thread that promotes appreciation for our soldiers serving in our military forces.

The hardcover books are a visual delight. All of the pages have a tan parchment background with some red accents. Each book has a generous scattering of full-color illustrations—maps, drawings, photos, and reproductions of famous artwork. The only criticism I have is that Rush Limbaugh’s face is used as the face of Rush Revere, and it looks like it was photoshopped.

For auditory learners or for families who might enjoy listening to these stories together while driving in the car, Rush Limbaugh reads each of the books aloud on audio CDs (four CDs for the first and fourth books and five each for the second and third books). Audio books are complete, unabridged stories.

I expect that most children will enjoy these stories whether through the books or the audio CDs, and they are likely to learn and remember these amazing stories of the early years of our country.