A Child's History of the World

This is one of my 102 Top Picks
Virgil M. Hillyer
BN Publishing 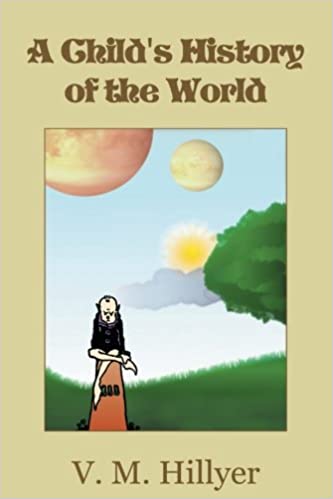 Hillyer's classic elementary-level world history, A Child's History of the World, is available as a paperback book and on Audible®. For years homeschoolers scrambled to find out-of-print copies of this book, paying premium prices for well-used copies. Finally, recognizing the demand, Calvert Education republished it in an updated edition. (The update included the addition of events through the twentieth century as well as some minor content changes to archaic expressions and ideas.) Calvert's version has gone out of print, but BN Publishing now sells reprints of the original book.

The primary appeal is the writing style. Hillyer speaks to children in ways they understand, yet he doesn't talk down to them in the short, choppy sentences typical of most texts written for middle elementary grades. The difference is obvious in the page count—460 pages. Illustrations are minimal: a few maps, line drawings, and occasionally words arranged to convey an idea. (Can you imagine any modern publisher offering a textbook this length for fourth graders without color illustrations?)

Despite the lack of illustrations, Hillyer's book is far better than most of its modern counterparts in my estimation. It offers depth and interest that are lacking in most textbooks. History coverage reaches beyond Europe, the Middle East, and North America with selective topics on other countries and cultures. Children's imaginations will be engaged by the stories of history told in their proper settings with enough detail to make them come alive. Because the book was written quite a while ago, it does not reflect modern sensibilities.

Hillyer clearly asserts Christian belief, although his biblical references imply a questioning of the truthfulness of Old Testament stories. Also, he sometimes slightly misinterprets the biblical text. For instance, he says, “King Saul had a daughter, and she fell in love with this... David the Giant-Killer, and at last they were married.” This version overlooks the fact that Saul had promised his daughter in marriage to whoever killed the giant—it wasn't really a matter of falling in love. The beginning of the book also discusses cavemen and prehistory in a manner with which some might disagree (e.g., cavemen talked in grunts).

A Child's History of the World really should be read aloud together so issues such as those I've mentioned can easily be discussed when you encounter them. The book has no chapter questions or assignments, so you might be interested in using A Workbook and Study Guide to A Child’s History of the World by Virgil M. Hillyer with Answer Key along with Hillyer's book.

A Child's History of the World is a good choice for the first world history text for younger students.

You might want to check out the premade lesson plans from Homeschool Planet that are available for A Child's History of the World. You can sign up for a 30-day FREE trial.

A Child's History of the World