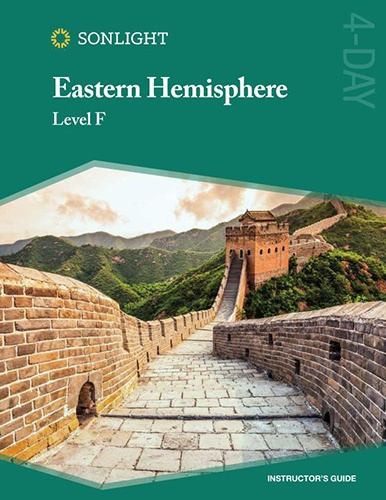 Sonlight’s History, Bible, and Literature F course for grades six through nine is titled Eastern Hemisphere. It takes an unusual approach, devoting a year to the study of non-western cultures. The course encompasses history, geography, cultures, religions, economics, Bible, missionary work, apologetics, forms of government, and literature. The choice to study eastern hemisphere countries is driven by a “missionary impulse,” as Sonlight explains on their website:

One of our passions is the "10/40 Window," the band on a map that extends between 10 and 40 degrees north of the equator and stretches from West Africa in the west to Japan in the east. Incredibly, about two-thirds of the world's population live in this small band. This area lacks access to the gospel (many governments are hostile to the story of Jesus); many of the people live in extreme poverty; many live without access to medical care and access to education.

Our hope is that, through your studies, you will know more about those other inhabitants of the globe, and grow in compassion for them.

The perspective of this course is primarily Protestant, with stories of Protestant missionaries incorporated into the history lessons, and a Protestant perspective in other areas. However, the religious perspective is broadened slightly with the inclusion of the biographies of two Catholic missionaries—Saint Theresa of Kolkata and Fr. Matteo Ricci—among the read-aloud books and readers.

The heart of the course is an instructor’s guide—you can select between two instructor’s guides with lesson plans for either four or five days per week. The course uses a long list of additional resources, all of which are included in the complete set. Most of the resources are read-aloud books (for parents and children to read together) and books for students to read independently.

Four books used throughout the entire course are Journey to the Eastern Hemisphere, 100 Gateway Cities of the 10/40 Window, Case for Kids, and All the Small Poems. Journey to the Eastern Hemisphere features encyclopedia-style articles on topics related to the countries and regions being studied.  The book 100 Gateway Cities of the 10/40 Window is essentially a call to prayer. It is a book with statistics and commentary about the spiritual situations and needs of 100 of the most strategic cities in the targeted region and specific prayer points for each. The book Case for Kids combines into one volume three of Lee Strobel’s books for children: Case for a Creator for Kids, Case for Christ for Kids, and Case for Faith for Kids. A collection of poems, All the Small Poems, takes unremarkable things—chairs, coins, a duck, weeds—and describes them in surprisingly creative and interesting ways. The CD Sing the Word: All Nations Shall Worship is also used throughout the year.

The many other books used in the course are a mixture of fiction, non-fiction, and cultural tales. For instance, there are missionary stories titled William Carey: Obliged to Go, Mary Slessor: Forward into Calabar, and Teresa of Calcutta. Some of the historical fiction titles used in the study are The Master Puppeteer, Breaking Stalin’s Nose, and Yung Fu of the Upper Yangtze. The non-fiction book Whatever Happened to Penny Candy? is used to contrast the economic theories of communism and capitalism. Books with cultural tales include Where the Mountain Meets the Moon and Sweet and Sour: Tales from China.

The instructor’s guide uses a one-page chart to give a quick overview of each week's lesson plans and daily assignments. The history and Bible notes that follow immediately after the schedule page include questions for discussion, suggested answers, timeline work, and mapping activities.

After the lesson plans, a 128-page section of the instructor’s guide has notes for each of the read-aloud books and readers used with this course. This arrangement allows parents to change the schedules for these books, skip a book, or otherwise tailor the use of these books to suit their situation. The notes for the readers and read-aloud books also include questions for discussion with suggested answers and vocabulary words for students to learn. The notes for some of the books include background information, cautions, or explanations about content in a book that might be unfamiliar or controversial.

Each student will create an Eastern Hemisphere Notebook using a set of three-hole-punched, looseleaf pages that come with the course. These pages have sections for students to write in information, complete map work, and write short compositions in response to prompts such as, “Write about an event in Israel’s history” (p. 88). The student notebook also offers the option to “Choose Your Adventure” when they study each country. Students are given their choice of activities that suit different types of intelligences (learning strengths), with activities such as cooking, presenting an oral report, writing a movie review, playing a musical composition by an ethnic composer, acting out a scene from a folk tale, memorizing a poem and reciting it, and completing a research project.

Two other resources that come with the complete course add hands-on activity. The China Kit has within it a calligraphy kit, chopsticks, rice paper, and a set of Tui-U (domino) cards. Fun with Easy Origami has instructions for origami projects and includes some origami paper.

The complete course also includes a set of timeline figures specially designed for this course. (The timeline book itself is an additional purchase since not all students begin their Sonlight studies with this program.)

In addition, the course authors believe that students taking this course should be starting to pay attention to world affairs, so they’ve added a requirement that students present an oral report on a current event once a week.

Eastern Hemisphere covers a lot of territory, fulfilling requirements for history, religion, and literature. To accomplish this, the course requires from four to six hours of student work per day and from two to three and a half hours from parents. Keep in mind that some of the parent's time is spent reading aloud from wonderful books. All of this is likely to be time well spent if you want to raise thoughtful Christians who have some understanding of other world cultures, especially those most different from their own.

Click on the image to go directly to Sonlight for current prices and options.

Sonlight has a Rewards Program I enjoy. Click on the image to go to their website. Create your account, and you'll get $10 off your first order ($100 or more), and you can earn Sonlight rewards credits for future purchases. (I also earn rewards credits that I can redeem at another time.)