The Story of Mankind 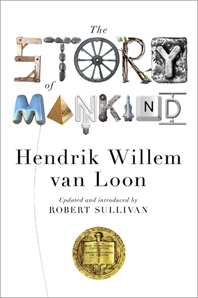 The Story of Mankind seems to be used as a core or spine world history by an increasing number of homeschoolers, particularly those looking for a history written from something other than a Protestant perspective. While the author was himself a Protestant, this history reads as if it was written by a secular humanist for the most part. This is even more true for the chapters added since Van Loon's death.

Originally published in 1921, it was updated in 1926, then at least three more times to where it now ends around 2010. The book begins with an evolutionary story of the development of man. The actual history begins with the fourth chapter, but the evolutionary perspective continues to crop up from time to time. Religions as well as mythology are treated with an even-handed tolerance, praising them for their good effects and criticizing their evils.

The style of writing is likely the most appealing aspect of this book. The author occasionally addresses his audience directly, and he maintains a story-telling attitude. For example, a chapter titled "How the Greeks Lived" begins, "But how, you will ask, did the ancient Greeks have time to look after their families and their business if they were forever running to the market-place to discuss affairs of state? In this chapter I shall tell you."

Despite the somewhat casual writing style, this history is written for children at least fifth or sixth grade reading level. It likely works best as a read-aloud for even those levels so parents can expand upon references unfamiliar to children or discuss abstract ideas. For example, there's an extended discussion about a court case brought to argue for "Open Sea" in contrast to the previous widely-held doctrine of "Closed Sea" that gave sovereigns control over seas surrounding their countries (p. 298). Van Loon introduces the argument since it lays the groundwork for understanding conflicts that arose during the colonial period, but the ideas might be challenging for younger children to grasp. However, older students can read it independently, and The Story of Mankind might even serve as a history text for high schoolers. Occasional maps and black-and-white sketched illustrations are moderately helpful to students.

The original book most likely ended after chapter 64, a three-paragraph philosophical reflection. At he conclusion of chapter 63, Van Loon summarized with his personal assessment of historical developments and the future that reads very curiously given what happened with the rise of Hitler only a decade later. Van Loon wrote: "The world is in dreadful need of men who will assume the new leadership—who will have the courage of their own visions and who will recognize clearly that we are only at the beginning of the voyage, and have to learn an entirely new system of seamanship [carrying on a metaphor of navigating the Ship of State] …. They will have to fight their way to the top against every possible form of opposition. When they reach the bridge, mutiny of an envious crew may cause their death. But some day, a man will arise who will bring the vessel safely to port, and he shall be the hero of the ages."

The book was first updated by Hendrik's son Gerrit. It seems to me that he tried to retain his father's writing style, although you can probably still spot the difference. Another update was done by John M. Merriman, covering up through the 1990s. Merriman's chapters are more detailed in their coverage of many events and seem to be at a more challenging reading level than the rest of the book—probably junior high and even high school level at some points. Merriman evidences a liberal bias that I didn't find prior to that point. Another update was done for the current 2013 edition by Robert Sullivan. Sullivan seems to bring the reading level back down a bit, maybe to junior high level, but he significantly increases the liberal bias with his contrasting treatment of Presidents George W. Bush and Barak Obama being only one of many examples. On the other hand, Sullivan raises important points regarding ecological problems, women's rights, and the problems of developing countries. Nevertheless, conservatives might want to skip some of these latter chapters.

Overall, this a very engagingly written history, and it is most supportive of a secular worldview.