Ancient Egypt and Her Neighbors 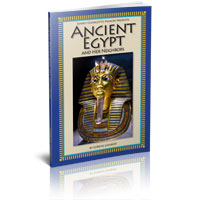 Charlotte Mason aficionados studying ancient history might find Ancient Egypt and Her Neighbors a perfect fit. While Egypt receives more attention than do the other ancient civilizations in this book, coverage of ancient civilizations other than those of Greece and Rome is sufficient for the elementary grades. Civilizations other than the Egyptian that are encountered in this book are the Sumerian, Harappan (Indus Valley), Briton, Babylonian, Chinese, Minoan, Hittite, Nubian, Assyrian, and Persian. A few others such as the Canaanites are woven into stories of these civilizations.

Some of the history resources popular among homeschoolers are collections of disconnected stories. In Ancient Egypt and Her Neighbors, Lorene Lambert relates some stories, but her storytelling takes place within the context of the historical narratives. She makes connections between events over time and between civilizations.

In addition, she sometimes addresses the geography, urging students to look at a globe. A map of Egypt and a modern world map at the back of the book might be used for geographical references although it would help to have larger, more-colorful geographical resources.

Writing in a lively, “living books” style, Lambert frequently speaks directly to her readers, often asking them prompting questions to engage their attention.

While younger children might listen to this as a read aloud, it seems to me that this book is best for children about fourth through sixth grade level—either for reading aloud or independent reading—because of the way Lambert intertwines the historical narrative. The vocabulary might be a little challenging for fourth graders to read, but pronunciation help is provided when difficult names are introduced as well as at the back of the book.

Lambert occasionally relates events to the Old Testament, such as Cyrus’ order that allowed the Jews in captivity to return to their homeland. Sometimes, she identifies time periods in reference to the “birth of Christ.” While such references don’t make it a Christian book, Christians are the audience most likely to appreciate such allusions.

While there are occasional black-and-white illustrations, this is not a book with particular visual appeal. It has no questions or activities. You might consider pairing it with the activity book by Marian Broida with the very similar title Ancient Egyptians and Their Neighbors: An Activity Guide (Chicago Review Press).

Auditory learners might prefer the audiobook version (MP3 download) so that they can listen rather than read, and some children might benefit from both print and audio versions to be able to listen while they read along.

Whether you use Ancient Egypt and Her Neighbors on its own or pair it with other resources, it promises a lively introduction to ancient civilizations that children should enjoy.

The book is available in print or as a PDF.