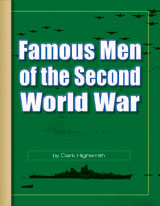 Adopting the format of John Haaren's "Famous Men" books that have been popular among homeschoolers, author Clark Highsmith uses a biographical approach to teach the history and key figures of World War II. In a typical World or American History course, students generally get a brief overview of WWII. But many students would love to know more, and Famous Men of the Second World War makes it easy to do so.

Thirty one chapters each each tell the story of a key figure such as Winston Churchill, Neville Chamberlain, Benito Mussolin, George Patton, Dwight Eisenhower, Bernard Montgomery, Raoul Wallenberg, Josef Stalin, Hideki Tojo, Isoroku Yamamoto, Chester Nimitz, Douglas MacArthur, and Audie Murphy. Stories are not strictly biographical as they expand into relevant events to make connections and ensure students learn the "big picture." Because of this, Adolf Hitler's story is told within the context of many of the other stories rather than in a chapter of its own. The thirty-second chapter, titled "Famous Women," tells in a general way how the roles of women dramatically changed in countries affected by the war and the significant jobs that they accomplished.

The numerous black-and-white illustrations throughout the book are primarily maps and historical photographs. Occasional sidebars add interesting stories. For example, "Infamous Nazis and Their Fate" relates a paragraph each on evil characters such as Heinrich Himmler, Ernst Katenbrunner, and Joseph Mengele.

Each chapter concludes with a set of multiple-choice questions. An answer key is at the back of the book. An index and an extensive bibliography complete the book.

Famous Men of the Second World War is interestingly written so that even someone like me who tends to avoid "war stories" found it engaging. I especially like the idea that I could read individual stories if I didn't want to read the entire book. Students who are interested in digging deeper into WWII should find this a great resource. It seems most appropriate for high school students, although some junior high students might be ready for it.