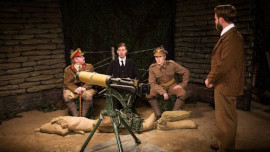 History Bombs® Classroom offers a unique way to make history come alive for students in grades five through twelve. A subscription gives you access to 45 short, engaging videos that introduce students to historical events in a way that grabs their attention. You can make better use of the videos by using the online flashcards, quizzes, PDF activity pages, and teaching information that I will discuss later.

The videos are presented under seven topical headings: Medieval, Early Modern, Industrial Revolution, World War I, World War II, 20th Century, the British Empire, and the Cold War. In the videos, skits are used to convey a great deal of information in a condensed format. The condensation of information itself, as well as the skit format, often produces humorous results. The format should make the key ideas much easier for students to grasp and remember.

For instance, the video about the Protestant Reformation in England, titled “Did people's religious beliefs really chop and change so quickly in the 16th Century?,” uses rhyme to relate the religious shifts from King Henry VIII through Queen Elizabeth I. Key characters tell the story as it jumps rapidly through the monarchs. The chronology of the English monarchs is interspersed with vignettes where churchmen struggle to figure out what to do—get rid of the religious paintings and crucifixes and hide the stained glass… or not. A churchwarden in the skit says:

Those English Prayer books are so expensive,
I’m not gonna buy them – it’s simply offensive!
And it’s a real shame about the wall [as they paint over a religious image],
But perhaps there won’t be too much change after all...
I’ve hidden our stained glass and Bible away
In case Catholicism comes back one day!

Some skits are more serious in tone or aren’t rhymed. The sobering video, “How did life change on the Home Front?” portrays realistic scenes and conversations about the difficulties and privations the United Kingdom faced during World War II. Another video poses the debatable question, “Is it possible to justify the dropping of atomic bombs on Japan?” Actors portray U.S. Secretary of State James Byrnes, British Admiral William Leahy, an unnamed Soviet general, and President Harry Truman in a debate setting. The debate moderator’s lines are not rhymed, but the lines of the four debaters are. (That might sound odd for such a serious topic, but it works well.)

Because these videos are created by a British company, they often present historical information from a British viewpoint, which is sometimes a little different than if they were created by an American company. I think this is actually helpful since it shows students that what they learn about history can be influenced greatly by the background and culture of the person who writes about it.

Subscription plans are available for schools, but I will list only those pertinent to homeschooling families and the resources available under each of those plans. All subscriptions are for one year. I will describe the support materials in the next section.

Student Plus: a single student has access to all of the videos, online flashcards, and online quizzes. The program will track student progress.

Homeschooler: one subscription with access to videos, online flashcards, online quizzes, and teacher packs (contents described below). You will need a Family subscription if you want to track students or provide access for more than one student at a time on different devices.

Family: this includes the Homeschooler plan features and provides you with three student accounts.

There are individual Teacher Packs (PDFs) for each video. A  teacher pack has brief teaching instructions, three activity sheets, a video transcript, a quiz, and an answer key. Alternatively, you can purchase a printed, full-color Teacher Handbook that includes all Teacher Packs for one of the seven topical areas of History Bomb videos. (You can photocopy pages from the Teacher Handbooks for students.)

The activities and worksheets for each video take students deeper into each topic. Teachers can choose which activities to use. For example, there are three activities for the video about the debate over bombing Japan. Brief, introductory material outlines the objectives for the activities. The first activity summarizes a number of arguments both for and against the bombing. Students discuss and individually rank each argument in terms of its persuasiveness. The second activity has students complete a worksheet as if they were President Truman, explaining why he made the decision to bomb. The third activity presents nine points over which historians might disagree. Students rank these from most convincing to least.

The flashcards have important terms for students to learn. The online flashcards accessible with some of the subscriptions can be viewed for one video at a time, or you can purchase one of the seven sets of 50 printed flashcards that cover each of the seven historical eras. Teacher Handbooks also have a timeline and a glossary that are closely aligned with the flashcards. The timeline and glossary are not included in the Teacher Packs.

Quizzes are available online with individual student accounts. Otherwise, they can be printed out from a Teacher Pack.

History Bombs can be accessed from a computer, tablet, or phone. I expect that the videos will be most effective when viewed by two or more students who will follow up with discussions and activities. However you use them, the History Bombs videos educate in a memorable way while they entertain.

Save 20% off the above prices by using my affiliate code CDUFFYSAVE20 when you purchase a subscription. (This also helps support my website.)