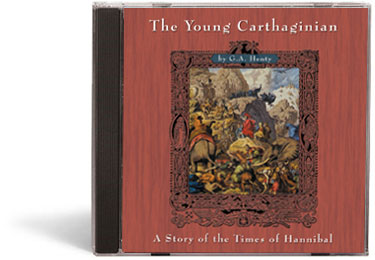 Jim Hodges has created an extensive library of audio recordings of many books and recorded presentations that make great supplements for history. Among those recordings you will find eighteen of the G.A. Henty historical fiction books, Margaret Pumphrey’s Stories of the Pilgrims, You Are There! Old Time Radio Shows, Little Bear Wheeler’s God’s Mighty Hand stories, and more.

You Are There! Old Time Radio Shows and some recordings of historical live broadcasts from WWII were created by others, but Hodges recorded the rest of the audio recordings himself. Hodges reads clearly, professionally, and with great expression, making each reading a storytelling adventure.

Since students learn better if they read while they listen, Hodges has also created a CD-ROM with text files of 101 G.A. Henty Novels. This is straight text, and while it can easily be read on any computer, there is no interesting formatting. However, the lack of formatting allows text to flow to different widths to be easily read on various book reading devices. The entire collection is only $25 which is only a little more than you are likely to spend to buy a single hardcover Henty novel.

Audio recordings are MP3 files that are available as downloads or on CD-ROMs. CDs will not play on regular CD players but must be played on a computer or MP3 player.

The selection of many of the recordings reflects a Christian (Protestant) point of view. For example, God’s Mighty Hand is subtitled Providential Occurrences in World History and features stories of God’s miraculous intervention and influence. The Henty books were primarily written from an English, Protestant perspective, so while they are not overtly Christian, they reflect English Protestant attitudes.

Old Time Radio shows were created by CBS in the mid-1900s. They recreated sound effects and dialogue for historical events such as the Battle of Hastings, the assassination of Abraham Lincoln, and the Salem Witch Trials, placing a reporter at the scene, supposedly reporting as events unfold. Interestingly, secular attitudes had already crept into CBS's creation of these radio programs. For example, “Ann Hutchison’s Trial” (Salem witch trials) takes a feminist perspective. This story might be more problematic than most, but I would suggest previewing these stories before having your children listen on their own. Even if they reflect attitudes with which you disagree, they might make great fodder for discussion.

Any of the recordings might be used by students for independent listening, but you might consider one of the longer recordings (e.g., a complete Henty novel) for the entire family to listen to on a long drive in the car, or shorter recordings for brief trips in the car. It’s a great way to keep everyone occupied with something useful. Of course, many of these recordings will fit well into your history studies too, providing a welcome break from reading.

You might want to check out the premade lesson plans from Homeschool Planet that are available for the G.A. Henty audiobooks. You can sign up for a 30-day FREE trial.