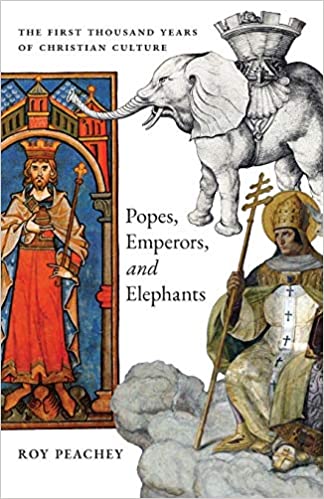 Popes, Emperors, and Elephants: The First Thousand Years of Christian Culture should serve well for those using a living books or classical approach for teaching history in grades seven through twelve. It’s very readable and relatively brief at 213 pages, but it is interesting enough to also appeal to an adult audience.

This book does not serve as a spine book for a history course but rather as a supplement. As the author, Roy Peachey, explains in an appendix, “This book provides the introductory background but it needs to be read in conjunction with other books (including the books of early historians like Tacitus, Eusebius, and Bede)” (p. 206). Peachey includes a relatively short list of such books in another appendix. Popes, Emperors, and Elephants could also be read alongside almost any other world history survey course for this era.

Peachey covers selected topics that address pivotal ideas and events that shaped Christian culture. Peachey often incorporates stories and his own commentary—both to interest the reader and to make connections between events. Many events he discusses are usually glossed over with a few sentences or ignored completely in history survey courses.

Even though it is supposed to start with the beginning of Christianity, the book begins further back since the roots of western Christian culture lie in ancient Greece and Rome as well as in the Jewish religion and culture. The first four chapters lay this groundwork, then the fifth chapter discusses the introduction of Christianity into the Roman Empire. Peachey then answers the question of why Rome became the center of Christianity, citing the martyrdom of Saint Peter and Saint Paul in Rome as a key factor. He explains how the Bishop of Rome became recognized as the preeminent bishop and was eventually given the title of Pope. This turned out to be a critical piece in the history of the next thousand years as many of the popes played pivotal roles in historical developments as the rule of law under the Roman Empire crumbled. A number of chapters deal with topics related to the Roman Catholic Church since it was the major force that shaped the culture of western civilization for centuries.

While we commonly think of Christian culture as “western,” Peachey devotes a chapter to the relatively early spread of Christianity to countries such as India, China, Ethiopia, and the Persian Empire. Later, it also spread to the north and east to countries such as Russia, Poland, and England. In some cases, those early Christian influences carried through to the present, and in others, they have almost entirely disappeared.

One of the points that Peachey emphasizes is that the Roman Empire did not end with the fall of Rome, but it continued for centuries with its base shifted eastward to Constantinople. He also challenges the conception of barbarians as uncivilized, wild tribes that swooped in to conquer foreign territory. Other authors have addressed this topic, but Peachey offers a much fuller picture of key players such as Charles Martel and invading forces, such as the Vikings, than do most history textbooks.

In his discussion of the rise and spread of Islam, he explains why it led to such huge military conflicts. The fact that he discusses this issue stands in contrast to many modern histories that avoid considering that Europe might have been overrun entirely by Islam and taken an entirely different religious and political trajectory.

Peachey inserts other topics that might seem random at first glance, but which deepen our understanding of the period. For instance, he discusses the amazing archaeological finds at Sutton Hoo in England that revealed an old Anglo-Saxon culture that was far more sophisticated and well-traveled than was previously thought to be the case. Finds such as that at Sutton Hoo cause historians to rethink previous assumptions.

In some ways, this is also the point of Popes, Emperors, and Elephants. Peachey wants his readers to understand underlying causes and events that shaped Christian culture. Given the recent tendency to rewrite history to suit philosophical and political viewpoints, this book offers a refreshing corrective to some commonly-held ideas—a corrective based on historical evidence.