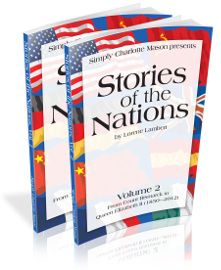 Charles Morris wrote two history books that were published in 1901, The Child’s Story of the Nations and The Child's Story of America. Lorene Lambert and Sonya Shafer have updated and expanded the two original books into two volumes for each. The new books, Stories of the Nations: Volume 1 and Volume 2 and Stories of America: Volumes 1 and 2, maintain the same delightful tone used by the original author.

The two Stories of the Nations books are collections of stories from around the world—stories of kings, queens, explorers, conquerors, scientists, writers, and landmark events. The two Stories of America volumes are about Native Americans, explorers, settlers, the creation of some of the states, presidents, inventions, discoveries, and wars. The stories are based on historical facts, although they are sometimes embellished with thoughts or feelings attributed to historical characters. Each book has a few full-color maps at the back for easy reference.

All four volumes serve well for those using a story-based approach to history. Coverage is necessarily selective, so it is helpful to have children create a timeline so they can see events in relation to one another.

The stories will probably best engage the interest of children between ages six and ten. This example from a story about Queen Elizabeth I of England gives you an idea of the engaging writing style.

Being a king or a queen can certainly seem like a job anyone would wish for. Indeed, who would not want to live in a beautiful castle, wear fine clothes, hold fancy banquets, and give orders to bowing servants? But being a king or a queen is not a simple task. Kings and queens have much to care about. If he is to be a good ruler, a king must consider what his people need and do all he can to help them and protect them (Stories of the Nations, Volume 1, page 19).

Stories of the Nations, Volume 1: From The Ottomans to Garibaldi (1550-1850), begins shortly after the discovery of the Americas at the height of the period of exploration. In the book’s 27 stories we learn about the Ottoman empire, Sir Francis Drake, William Shakespeare, Cardinal Richelieu, the rise of the Qing Dynasty in China, Peter the Great of Russia, Captain Cook, Simon Bolivar, the Boer settlement in Africa, Napoleon’s conquests, Stanley and Livingston’s exploration of Africa, and many more. The stories range widely in both time and location.

Stories of the Nations, Volume 2: From Count Bismarck to Queen Elizabeth II (1850-2012) features stories about people and events such as Otto von Bismarck, Alfred Nobel, Marie Curie, World War I, the Lusitania, the Russian Revolution, the Great Depression, World War II, the creation of modern Israel in 1948, the Kon-Tiki expedition, discovery of the Dead Sea Scrolls, the  launch of Sputnik, the fall of the Berlin Wall, and construction of the Chunnel between France and England. 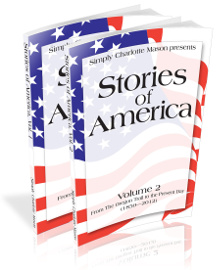 Stories of America, Volume 1: From Columbus to the Alamo (1492-1850) features both stories and poems. Subjects of the stories include Christopher Columbus, Native Americans, Captain John Smith, Pocahontas, the Pilgrims, the Quakers, the French and Indian War, the Revolutionary War, Paul Revere, John Paul Jones, George Washington, the invention of the steamboat and the cotton gin, and the battle at the Alamo. Among the poems are “The Landing of the Pilgrim Fathers” by F. D. Hemans and “Paul Revere’s Ride” by H. W. Longfellow.

Stories of America, Volume 2: From The Oregon Trail to the Present Day (1850-2012) continues with stories of the Oregon Trail, the Gold Rush, slavery, Abraham Lincoln, the Civil War, General Custer, Alexander Graham Bell, Booker T. Washington, Elizabeth Cady Stanton, The Spanish-American War, Theodore Roosevelt, Henry Ford, Ellis Island, World Wars I and II, the end of the Cold War, the War on Terror, the Information Age, and more. Some of the featured poems are “The New Colossus” by Emma Lazarus and “The Flag Goes By” by Henry Holcomb Bennett.

Stories of the Nations and Stories of America are the sort of living books that should serve well for homeschoolers who want to follow Charlotte Mason’s approach to learning. To make that even easier, you might want to use the Narration Notecards designed for each volume of Stories of the Nations and Stories of America. These are sets of notecards with prompts to help children retell the story in their own words. The prompts, suitable for children in first grade through high school, are on one side, and key people, places, dates, and vocabulary words are on the reverse side. All four books, as well as the Narration Notecards, are available as either printed products or PDF files.

Using books that are collections of stories (such as Stories of the Nations and Stories of America) as part of more comprehensive studies of history helps ensure that students don't miss critical information. The comprehensive study either provides more information to fill the gaps or recommends appropriate books on other topics that need to be covered. Simply Charlotte Mason, the publisher of these books, recommends that Volume 1 of both series be used along with their comprehensive history course Early Modern and Epistles that covers 1550 to 1850, and Volume 2 of both books can be used with their course Modern Times and Epistles, Revelation that covers from 1850 to 2012. Of course, the books and Narration Notecards can also be used with your self-designed program or along with other Charlotte Mason style programs.