The Extraordinary Adventures of G.A. Henty

G.A. Henty’s historical fiction books are hugely popular in the homeschool world in printed editions as well as audio books. They are often incorporated into unit studies and real-book programs, and many young people just read them for enjoyment, aside from their historical value. While other publishers have created outstanding audio recordings, both abridged and unabridged, the new presentations from Heirloom Audio are really something special. The script writers, the sound engineer, the actors, the creator of the musical score, and others involved in making these productions have been involved in major, critically-acclaimed productions, and their expertise shows! These are really top-notch, audio theater experiences as well as an entertaining way to learn some history.

Thus far, they offer recordings of "Under Drake's Flag," "In Freedom's Cause," and "With Lee in Virginia." These audio presentations are very abridged versions of the books with a playing time of about two hours each. The recordings are truly theatrical rather than just dramatic readings. About 20 professional English actors provide the voices for many characters as well as the narrator in "Under Drake's Flag." Original musical scores and sound effects heighten the drama. So much so that I actually found it difficult to listen to "Under Drake's Flag" while driving because it absorbed so much of my attention.

The audio presentation is available on CDs or as MP3 files. The CDs come packaged in a case. The CD set for "Under Drake's Flag" includes an abridged version of a companion study guide. However, for all CD sets, a free version of the complete study guide can be accessed at the publisher’s website.

Study guides have some background historical information, study questions, and Bible studies. Study questions include both "Listening Well" (comprehension) and "Thinking Further" (deeper thought and analysis) questions. Questions often address issues regarding character, virtue, and faith. Some vocabulary words are given but it’s up to you as to how to work with them. Occasionally students will need to do a little outside research. No answer keys are included. Use of the study guides is optional, but parents might want to at least use a few of the Thinking Further questions to prompt some discussion after listening to each presentation. 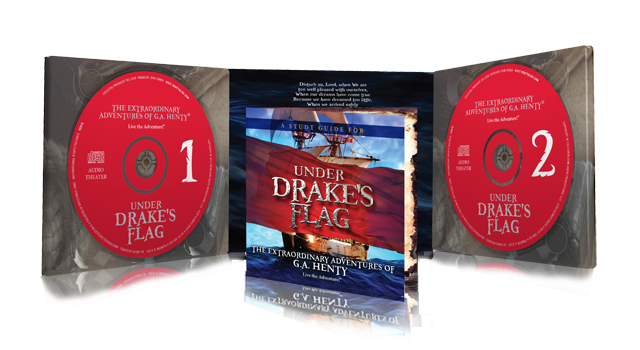 Their first “audio theater” presentation is of Henty’s book, Under Drake’s Flag. As in all of Henty’s books, a young man is the protagonist of the story, and his life becomes entwined with that of a major historical figure—Sir Francis Drake in this case. This story highlights the conflict between England and Spain on both land and sea with Drake leading the English. Under Drake’s Flag has a particularly strong spiritual component throughout the story, and especially as the young man, Ned, is arrested by the Spanish Inquisition. Ned takes a strong stand for his Protestant faith. Themes of heroism and courage in all of Henty’s stories can inspire young people to develop those character traits in themselves.

The study guide includes a short biography of Sir Francis Drake. Be aware that, as in the original book, both the guide and the audio production portray Drake in very positive terms. For example, the guide says, “We find a shining example in Sir Francis Drake whose noble steps of character won him more than physical gold and silver. He found the treasure of living a life fully devoted to God.” Yet, many historians paint Drake as an opportunist who operated on a level that sometimes overstepped into the realm piracy.

The guide concludes with three additional, stand-alone lessons that are Bible-based studies on “Godly Character,” “True Manhood,” and “Confessing Christ.”

Listening to the CDs a chapter at a time and using the material in the study guide will help you to get the most out of the listening experience. The study guides might even help students get a better sense of the story line if they are confused by the voices and the drama. Listening to the CDs might be a great family activity since each chapter is short enough for a single listening session. The study guide questions should also be engaging for all but very young family members. 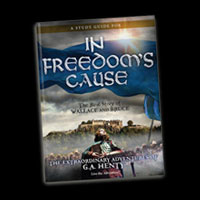 "In Freedom's Cause" is the story of the fictional young man Ned Forbes. Forbes' admiration for the reported exploits of Sir William Wallace of Scotland makes him eager to support Wallace's cause of fighting for Scotland's freedom from England. When Forbes is suddenly given the opportunity to join Wallace's efforts, he eagerly joins up. Forbes quickly becomes a trusted knight in the cause himself, demonstrating his own heroism. The first part of the story focuses on Sir William Wallace, portrayed in this presentation as a man of extraordinary virtue: bravery, perseverance, loyalty, and unwavering confidence in God. Even at his horrific execution, he stays faithful, inspiring others to pick up the cause. William Wallace's Psalter, held dear by Wallace himself, becomes symbolic through the story as it is eventually presented to Robert the Bruce as the real source of strength. "In Freedom's Cause" teaches strong Christian faith but without any denominational position.

Fueled by Wallace's heroic sacrifice, Robert the Bruce becomes King of Scotland and again raises an army with Sir Ned Forbes supporting his cause. Reflecting the historical record, the story intertwines stories of the conflicts between Scottish leaders, their corruptions and betrayals. In the midst of the story, a romance grows between Lady Marjorie as Ned and she rescue each other in turn. The story ends on a positive note with the Scottish triumph at Bannockburn.

The free study guide is available online. "In Freedom's Cause's" study guide is more than three times as long as the guide for "Under Drake's Flag." The format is similar, but there are now 37 lessons to accompany the presentation (in contrast to the 19 lessons in the first guide). There are also three Bible study lessons at the end. While you can stop and use the study guide at each appropriate point, with 37 lessons, it seems to me that you would be stopping too frequently. I suspect that most listeners will prefer to at least listen once through the entire presentation without interruption before getting into the study guide questions.

With Lee in Virginia 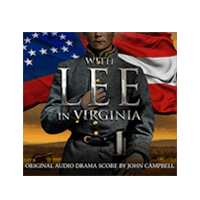 "With Lee in Virginia" begins in the Spring of 1861 near the beginning of the Civil War. Young Vincent Wingfield helps an escaped slave, developing an "anti-slavery" sub-theme within this dramatization.

Vincent soon enlists in the Northern Virginian army and ends up fighting alongside fabled Confederate generals, Robert E. Lee and Stonewall Jackson. He is captured by Union soldiers and imprisoned. He eventually escapes and rejoins the Confederate army. Through his adventures, he suffers the loss of two friends, emphasizing the cruelty of war.

Serving as a spy, Vincent is betrayed and by his hometown nemesis, Onus. After this second imprisonment, he again escapes from his captors, and is able to deliver vital information to General Lee. He continues to fight until Lee's surrender at Appomattox.

The 48-page study guide has comprehension questions, but it also delves into complex issues with questions such as, "As far as Scripture is concerned, is it right for anyone to break up a lawful marriage? See Matthew 19:4-6" ("The Slave Auction, Part II") and "What question does Vincent raise about God? What do you suppose he is thinking? Does God promise to protect us from all harm under all circumstances? Is this because He can’t? Explain" ("Vincent's Convalescence, Part I").

"With Lee In Virginia" teaches the importance of courage, a strong commitment to duty, and perseverance as well as faith in God in the most difficult circumstances. A few of the chapters in this adventure particularly address the challenge of doing the right thing even when it might not be lawful. Biblical principles, faith, and prayer play major roles throughout this presentation.