The Kingfisher Atlas of World History 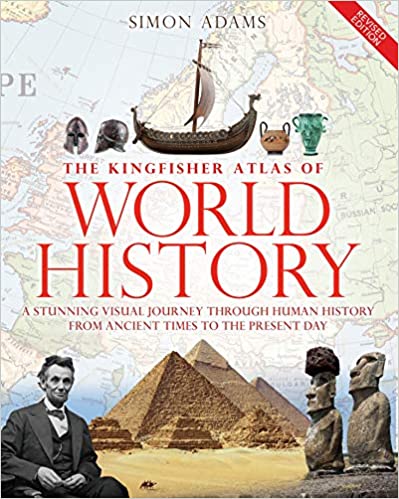 The Kingfisher Atlas of World History (2016 edition) presents a gorgeous, oversized, pictorial summary of world history in about 190 pages. Beginning with the ancient world, it moves through time and around the world using each two-page spread to show a very abbreviated account of what happened in various geographical areas. Most two-page spreads tell the story through maps “decorated” with images, accompanied by brief amounts of text. Vertical timelines on most right-hand pages show key events in chronological order.

The book begins with about 10,000 B.C. when, as the book explains, people learned to cultivate crops and began to live in settled communities. Each of the four sections of the book circles the globe to include historical events in Asia, Africa, and other geographical areas even though Europe rightfully receives more attention through the medieval era and North America becomes a major player in modern history.

The large maps often speak for themselves since they show the topography so well. For example, the reader can easily see why settlements were made near coasts and rivers or how natural barriers caused by deserts and mountain ranges separated people groups and dictated trade routes.

While the maps themselves are the primary images throughout the book, small images with a sentence of text highlight significant places, events, discoveries, developments, and people. Occasional page spreads cover special topics such as the Aztecs, the spread of Islam, the Reformation, the slave trade, and the industrial revolution. The history is necessarily brief and selective given the scope of the book, but it serves well to help readers form an understanding of history over time.

I do need to make a few comments about the Modern World section. Here I picked up some political slants and judgments with which some homeschoolers might take issue. For example, “Fundamentalism” is defined in a list with only five other “isms”: capitalism, communism, fascism, Marxism, and Nazism. Treatment of the Cold War era paints the U.S. in a negative light, and includes statements such as, “By the late 1980s, the U.S. had outspent the U.S.S.R. and forced it toward financial ruin,” implying that American military spending was the sole factor in the collapse of the U.S.S. R. Treatment of the Israel-Palestine issue also seems slanted against Israel. Even if some of the subtly expressed opinions don’t suit you, this book could still be used if you make sure that it is balanced with information in your core resources or through discussion.

The book seems ideal as a supplement for students in about grades four through eight who have enough historical information to begin to slot what they know into a larger framework and who will benefit from the geographical context presented for historical events. Both younger and older students are also likely to be drawn to the book to study the maps and illustrations because the book is so visually interesting.

The Kingfisher Atlas of World History: A pictoral guide to the world's people and events, 10000BCE-present