The Usborne Encyclopedia of World History 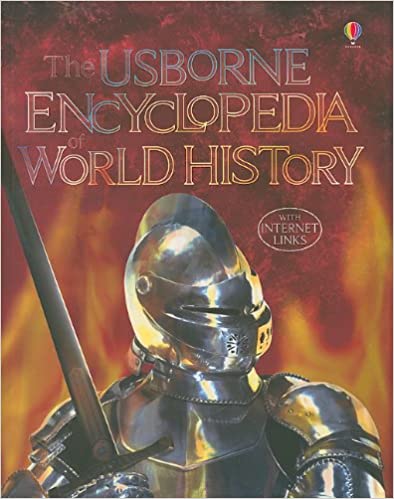 The Usborne Encyclopedia of World History encompasses what were at one point four separate books: Prehistoric World, Ancient World, Medieval World, and The Last 500 Years. Usborne periodically updates this book, not changing the essential content as far as I can tell, apart from the most current events. The book includes internet links, but those links are to a website that directs you to the correct and current page on the internet. This means you don't have to worry about links being out of date.

This beautifully-illustrated history book can be used to cover the entire scope of world history. The target audience is approximately grades four through six, but older and younger children will likely also find it interesting. History and culture are combined as is appropriate for these grade levels. Although the text is broken up by illustrations, it flows in columns, making it fairly easy to read. Illustrations all have helpful descriptions—children are likely to browse through these books just “reading” illustrations and their descriptions. A timeline chart with illustrations is at the back of the book along with a glossary. Coverage of history is necessarily spotty, but this book should give children a general introduction to world history.

This book is written from a secular perspective. Religion of any type receives relatively brief attention.

The Prehistoric World section is almost entirely based upon evolutionary assumptions, much of which is presented as fact. Those teaching from a biblical Christian worldview are most likely to have trouble with this section and might skip it altogether.

The Ancient World section begins with the first farming communities. It briefly touches on a few examples of ancient towns then moves on to the Sumerian and Egyptian civilizations. Hittite, Canaanite, Phoenician, Assyrian, Hebrew, and other ancient civilizations also get brief coverage. Coverage of ancient Greece and Rome is given more space, and China, Japan, Africa, India, and the Americas also get attention.

The section about the Medieval World picks up where Ancient World leaves off, around 500 A.D. It begins with the Byzantine Empire, skipping over barbarian invasions to discuss the barbarian kingdoms that arose. Arabs and Islam, Vikings, Anglo-Saxon England, Charlemagne, and the Holy Roman Empire typify the range of topics covered next. Castles, towns, trade, and the Church all receive attention as significant historical factors. Coverage expands beyond western civilization to worldwide, including the rise of the Russians, the conquest of North Africa, East Africa, Southern India, Southeast Asia, Pacific Islanders, the Americas, and other civilizations up through about 1400 A.D.

The Last 500 Years section condenses a huge amount of history by using selective and brief coverage. It begins with world explorations and closes at the beginning of the twenty-first century.

The Usborne Encyclopedia of World History should work best as a spine book or as part of a unit study or other encompassing program. This book provides historical information in chronological order while the rest of the study might include biographies, historical fiction, videos, or other resources. The internet links within this book might provide some of the added material you need. These sometimes appear in very small type at the top of pages, and sometimes there are a few pages dedicated to annotated lists of internet links.