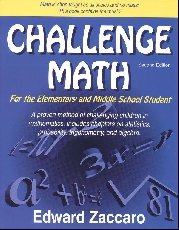 Ed Zaccaro, a teacher who specializes in teaching math to gifted students, developed his own line of supplemental math books to meet the needs of his students. Challenge Math is a series of three books: Primary Grade Challenge Math for grades one through four, Upper Elementary Challenge Math for students in grades three through five, and Challenge Math for the Elementary and Middle School Student, a book for grades five to eight. However, all three books might well be used with average students beyond those grade levels. For example, Primary Grade Challenge Math covers some topics unfamiliar to most first and second graders, topics such as division, ratio and proportions, negative numbers, square roots, and exponents! Similarly, Upper Elementary Challenge Math has topics such as fractions, decimals, percents, ratios, speed, algebra, and bases (changing from base 10 to other bases) that are more typically found in student texts for at least fourth through eighth grades. So unless you have a very gifted child, you are likely to use books when your children at the upper levels of the grades spanned by any one of the books and you might well use them beyond the suggested grade levels.

Challenge Math books are supplements to your main program. They will sometimes explain basic concepts, but they assume that students are receiving systematic instruction elsewhere. These books present students with word problems that will challenge both their math and thinking skills. They will reinforce basic concepts and also take students to a deeper level than students will encounter in most textbooks. Some advanced topics are introduced in these books before students will be likely to have encountered them elsewhere. In such cases, explanations are more thorough.

Each book presents sets of math problems at either three or four levels of difficulty—three levels in Challenge Math for the Elementary and Middle School Student and four levels in each of the other two books. Lessons each follow a similar format. A topic is presented with instruction and examples, often in the form of word problems with illustrations. This is followed by sets of problems labeled as in Primary Grade Challenge Math: “Level 1 (easy), Level 2 (somewhat challenging), Level 3 (challenging),” or “Einstein (very challenging).

Upper Elementary Challenge Math has additional problem sets that follow the introduction. These problem sets each include a set of problems on a similar topic—sometimes the exact same topic. But problems start with a warmup problem, then follow with four more problems, each more challenging than the others.

In most problem sets, you should probably have the brightest students work through some of the easier problems to ensure that they have easier concepts mastered, then let them move on to whatever level or levels will stretch their knowledge and skills. For other students, you might use only the easiest or easier problems in each lesson. (You might find it useful to revisit other problem sets in a year or two.)

Here are a few examples of the Level 2 problems from each book. A problem in Primary Grade reads, “A spider in a box had 100 babies. How many legs are there in the box?” (p. 77). Upper Elementary has a problem that reads, “A statue is made of gold and silver in a weight ratio of 5:3 (Gold to Silver). If the total weight of the statue is 48 pounds, what is the weight of the gold in the statue?” (p.173). In Challenge Math for the Elementary and Middle School Student we find a problem: “Kirsten is planning a bike trip of 408 miles across Iowa. She plans to travel an average of 8 hours a day at a speed of 12 mph. If food costs $8 per day, how much will the food cost for her trip?” (p. 243). So you can see that most of these problems require multiple steps in math rather than simple one-step solutions.

Students are likely to work through lessons on their own, although they could be taught within a group class. The font used in the books is large and easy to read, and pages are not overly cluttered. Books are reproducible for a family or classroom, and each book includes its own answer key at the back.

I believe that the sort of problems presented in these books are excellent for developing the sort of real-life math application skills that we should be aiming for. I also think that many students will enjoy the complexity of the problems—like solving puzzles. You can use any one of the books over at least a few years, so the Challenge Math series books should be a cost-effective and interesting supplement alongside most math programs.

I want to mention another book by Zaccaro that bears some similarity to the Challenge Math series. Becoming a Problem Solving Genius: A Handbook of Math Strategies is formatted like the other book with instruction followed by problem sets at five different levels of difficulty (rather than three or four).

In 15 of the book’s 17 lessons, Zaccaro teaches a problem solving strategy with explanation and examples followed by problem sets. Some strategies are straightforward math such as the steps for solving equations. However, Zaccaro also teaches a few strategies of his own such as “Think 1” and the “2-10 Method.” The last two lessons appear to be material that can be used for a math competition and for a group game. These two lessons might not be usable in all situation.

Lesson in the book tackle strategies basic to solving algebra problems and working with functions along with other topics. Consequently, Becoming a Problem Solving Genius is likely to be best for students encountering those topics which might be as early as junior high or even earlier for some gifted students. As with the Challenge Math series, this book should serve as a supplement alongside your core math program.