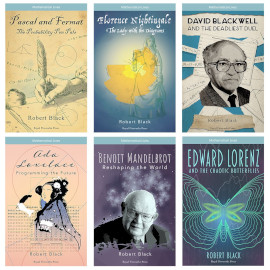 The Mathematical Lives series consists of six biographies that tell the stories of well-known persons who have some relation to mathematics. The books are:

Most of the featured people have obvious connections to math, but the inclusion of Florence Nightingale surprised me. Her importance is actually highly related to math because she used data, graphs, charts, and diagrams to analyze health-related information, death statistics, and other data, much of it based on her experience working with soldiers on the battlefield. For example, she analyzed the death rates of soldiers, then demonstrated how improved living conditions and health care for soldiers would reduce their death rate and strengthen the army. Her data-driven information was at the foundation of her efforts to revolutionize nursing.

Florence Nightingale: The Lady with the Diagrams is probably the most readable book of the series for those less mathematically minded. The other five books are also written in a lively storytelling fashion, but they delve into discussions about mathematical theory, and include many mathematical equations, charts, and diagrams. Following is a brief quote from page 53 of David Blackwell and the Deadliest Duel to give you an idea regarding the math included in the stories.

But what counts as a "high enough" value for p? The difference between the two graphs is the value of a12 and whether it is greater than or less than a22. That means that the critical point is where they are equal to each other. And since we have equations for both of them in terms of p, we can set up an equation based on p.

These books are most likely to appeal to the student who delights in math. The stories are well written, but to really enjoy them, the reader needs to take the time to consider the equations and other mathematical information which often involves, algebra, calculus, statistics, and other areas of math. Students who are curious about math are likely to find the series both enlightening and inspiring.

$75 for the set of six books from the publisher

Edward Lorenz and the Chaotic Butterflies

David Blackwell and the Deadliest Duel

Florence Nightingale: The Lady with the Diagrams