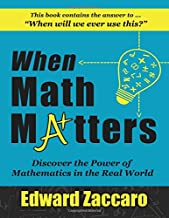 When Math Matters: Discover the Power of Mathematics in the Real World should be great for kids who wonder why they need to learn math. Each of the book’s 55 brief chapters addresses a particular real-life situation that requires math.

Author Edward Zaccaro does a great job of selecting a variety of situations that range from silly to life-threatening. “Chapter 31: The Rat Genius” is a great example of the silly topics. Loosely based on a true event, the chapter relates the story of a football fan and scientist who wanted to see if she could predict the winners of football games using rats. She put 100,000 hungry rats in a room with a tunnel entrance on each side of the room labeled for one of two football teams. Food was at the end of both tunnels. The story continues by explaining her method: select only the "winning" rats, and gradually winnow down her 100,000 rats to a single rat that she determined was a genius. The entire scenario turns out to be based on the researcher’s misunderstanding of probability rather than a valid science experiment. Students learn about probability while also learning how science experiments should be designed.

Most of the chapters address situations that have much more weighty consequences, although Zaccaro often presents the lessons with a touch of humor in both the text and the illustrations. For instance, “Chapter 5: Caffeine and the Misplaced Decimal Point” discusses an actual study on the effects of caffeine in which a researcher misplaced the decimal point for the dosage, and two study participants were given 30 grams of caffeine rather than .30 grams. Both men almost died because of the error.

In each chapter, Zaccaro presents a situation then gives students a number of math word problems that relate to the topic. Many of these situations are actual events such as the caffeine study, and others are based on possible real-life situations. Zaccaro's approach helps students understand why and how mathematical skills can be applied in their own lives.

Among the far-ranging situations addressed in When Math Matters are exchange rates for foreign currencies, the actual savings on "special deals," student loans that result in staggering levels of debt for college graduates, lotteries, creating a gas and oil mixture for a chainsaw, the value of a rebate versus free financing for a car loan, the danger of rent-to-own purchases, and the misuse of statistics. Math applications require students to be familiar with decimals, percents, unit conversions, ratios, and basic geometry (e.g., determining the area of a circle and calculating the length of a hypotenuse).

When Math Matters also gives students plenty of practice in critical thinking. The situations in each chapter require students to analyze information, often asking them to think beyond what is actually presented to identify what additional information is needed. They then have opportunities to apply what they have learned in the word problem exercises. Most chapters add a “genius-level” problem at the end to challenge advanced students. An answer key is at the back of the book.

The author recommends the book for students in grades five through twelve. While I think it would be beyond the average fifth grader, it should be great for gifted students at that level.

The format of When Math Matters makes it perfect for group classes that meet just once a week for an hour or two. You should be able to complete one or two chapters per week. While the interaction of a group class might be more fun, the book is still great for students to work through on their own.

When Math Matters: Discover the Power of Mathematics in the Real World