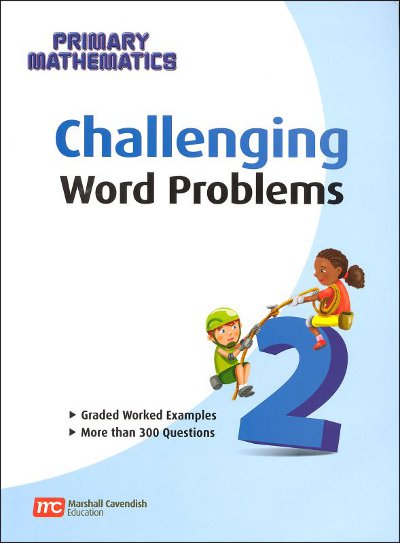 Singapore Math/Primary Mathematics has a few supplemental series of workbooks that correlate with their three series of textbooks for the elementary grades. I am reviewing the Challenging Word Problems series separately from their other books since this series can be used alongside just about any math program.

These books are some of the best I've seen for helping students learn how to solve word problems. Each section of a Challenging Word Problems book begins with worked examples that apply an arithmetic skill within various word problem contexts. Illustrations such as number lines, arrays, and objects are frequently used to help students visualize what is happening. Worked examples are followed by practice problems to ensure student understanding. Then each section has worked examples of "Challenging Problems" followed by a series of more challenging problems to solve. Answer keys are at the back of each book.

Sections in these books do not correlate exactly to units in the textbooks although they do cover topics taught in the corresponding levels of the program. For example, division by a decimal is taught in unit 8 of the textbook (Common Core edition Primary Mathematics Textbook 5B) while word problems that require division by a decimal show up in section 6 of Challenging Word Problems 5.