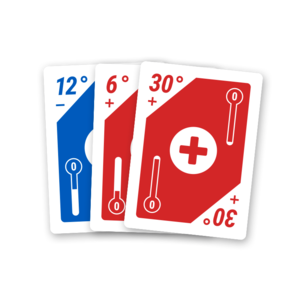 Fahrenheit: The Weather Card Game is probably most useful for developing familiarity with the concept of positive and negative numbers rather than for understanding weather. The card deck consists of 84 playable cards and four reference cards that visually show the relationships of all of the numbers ranging from positive 32 degrees to negative 32 degrees. Temperature cards have numbers within this range, but only using even numbers. Positive cards are red and negative cards are blue.

The game is played like many other card games. Deal five cards to each player and turn over a card. Players must match or play a higher card if the card is positive, since this means the temperature is rising. If a blue card is in play, players must match or play a lower card since the temperature is dropping. The draw pile is available for those who get stuck.

The game is suggested for those seven and older since players need to be able to grasp the concept of positive and negative numbers.

Scoring adds another dimension. Each hand might be played rather quickly, so a game consists of a number of hands. The goal is to end up with a score closest to zero. The player who goes out first each hand gets zero. Other players add and subtract cards remaining in their hands according to their values to get their scores, using both positive and negative values. These scores will accumulate over the hands played in the game. A forward-thinking player with a high positive score might then try to accumulate negative cards in their next hand to help offset points. This level of strategy makes the game even more challenging. With younger children, you might simply track who wins the most hands rather than accumulate scores. However, the accumulation of scores makes the game complex enough to be more fun for adults.