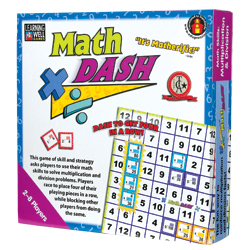 Two Math Dash games are available—one for Addition and Subtraction and one for Multiplication and Division. Math Dash is a bit like Connect Four® and other games where you have to line up four squares in a row to win—in this case on a game board. Math Dash makes it more challenging by putting numbers on each square on the fold-out, full-size game board. The games are sturdy and attractive with full-color printing throughout.

I received the Multiplication and Division game for review, so that is what I will describe. Each player gets a stack of small square cards printed with either multiplication or division facts up through 12 x 12 = 144. Cards are printed in eight sets of 48 cards each with each set a different color. Up to eight people can play at one time. Players who haven’t yet mastered division can be given a set of multiplication fact cards rather than division, but it really doesn’t matter whether a player has division facts or multiplication facts. For multiplication problems, players identify a missing multiplier. For division, players identify the quotient. Since those missing numbers are from the same set of integers, those are the numbers on the board.

The cards are sturdy, thick game pieces that should stand up to a lot of handling. You’ll need to separate them from their sheets when you open the game. You’ll want to be able to quickly choose decks of the same colored cards equal to the number of players. So, you’ll want to keep the colors separate between games. A good way to do that is to rubber band each stack together then store them in the box sections where they fit nicely.

With only two players, you might want to increase the difficulty by requiring five squares in a row to win. You can easily vary winning “patterns” as you can with bingo games—four corners, a square, or some other geometric configuration, as well as by changing the number of covered squares in a row.

Students only need to solve one math problem per turn, so that makes Math Dash easier than games where students need to consider multiple math problems to make a move. Yet the game should play relatively quickly, depending upon the number of players, so students should get plenty of math practice. Answer keys are on the underside of each box.

Strategy comes into play as students consider the probability of being able to complete their sequences in different rows or diagonal lines. They also have to think about blocking opponents’ moves as you do in Tic-Tac-Toe.

Math Dash games should be great for the whole family since the strategic elements make them fun to play even for older children and parents who probably have already mastered their math facts.

(Note: Don't confuse this with Learning Resources' Math Dash game which is played more like Scrabble.)