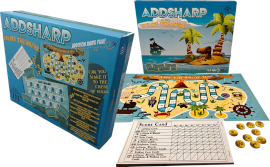 Math Sharp Kids produces games and workbooks that help children master their basic math facts and learn efficient ways to accomplish addition, subtraction, multiplication, and division at various levels of difficulty. That means Math Sharp products can be used over several years, most likely from kindergarten through fifth grade.

All games except Double Sharp Half Sharp have a corresponding workbook and teacher’s guide. The titles of the workbooks are:

The games and books both teach strategies for learning math facts and for problem-solving, many of which are unusual. The games teach the basic math facts for the four operations, grouping the facts in ways that help students learn relationships and tricks to quickly recall the facts.

The workbooks don’t rely on strategies learned in the games, but they assume students have mastered the basic facts for the corresponding functions. Each workbook then begins with more-challenging problem solving, introducing lesser-known strategies that should be more efficient. So, for example, the game AddSharp: To the Pirate Treasure teaches the addition facts through 9 + 9 = 18. Then the workbook AddSharp: Beyond the Pirate Treasure begins with a strategy for adding columns of four or more one-digit numbers (an algorithm called efficient addition) and progresses through adding columns with up to six, four-digit numbers. The game might be introduced in kindergarten or first grade, and the corresponding workbook might be used in first, second, and third grade. If students learn their addition facts in some other fashion, they can still use the workbook to learn how to add large numbers or columns of numbers using a strategy that substitutes for the standard method of carrying. The other games and books work in a similar fashion: use the game first, then the workbook. (The Double Sharp Half Sharp game should be used before Time Sharp: Journey to Saturn.)

Most of the games and workbooks are not dependent on each other. The exception is the Divide Sharp: Beyond the Crystal Cave workbook. On the first student page, it refers to a strategy and game from Time Sharp: Beyond the Journey to Saturn. Page 13 refers to the “dot method” used for solving multiplication problems. And page 64 shows a division problem requiring subtraction, illustrated with the subtraction strategy from Minus Sharp: Beyond the Lost City, a strategy that differs from traditional borrowing. Aside from this one exception, students might use only the games or only the workbooks. Even so, the ideal would be to use both the games and workbooks.

The games are very attractively designed. Each game includes an exceptionally sturdy box, an instruction book, a set of folded game boards (heavier than file folders, but not chipboard), a set of markers used to keep track of the math facts students are working on, sets of cards with math facts on one side and answers on the reverse (cards are 1.25 x 1.5 inches), and a pad of scoresheets. Everything but the scoresheets is printed in full color.

The instruction books range in length from 9 to 23 pages, not because the games are complicated but rather because the books teach the specialized strategies for mastering the different sets of math facts. Parents need to teach the strategies from the book, possibly reading them aloud, then discussing and demonstrating them.

Icons are used for each group of math facts to group those that share a strategy. The same icons are on the cards, the game boards (each of which uses a limited number of icon-grouped cards), and the game markers.

The games are designed for students to play only against themselves to improve their speed and accuracy with math facts. Each set of game boards includes three boards specifically designed for the various groups of math fact cards, plus two boards for tracking progress. Students use the prescribed set or sets of cards for each game board, laying them down on squares that have the correct answers as quickly as they can. They self-check by flipping the cards over. Parents should note the time required for each attempt on the scoresheet.

The progress boards each have a path marked with times. The primary progress board shows times from 7:40 (seven minutes and 40 seconds) to 1:00, with the time decreasing by ten-second increments on each space. Students start at 7:40 and work towards completing each of the game boards in one minute or less. The second progress board shows times of 9:40 down to 3:00 and should be used if a student needs more than 7:40 at the outset or is not likely to be able to complete a game board in one minute. Students move their marker to the most recent time achieved. (They also lose a minute on the board for each incorrect answer.) Students will probably play several times over many sessions to try to improve their time and accuracy. The scoresheets help students identify their best time thus far when they start a new session.

The strategies for mastering math facts are sometimes very simple and are supported by the icon for the group of cards. For example, “neighbor cards” have the icon of two houses sitting next to each other. This icon identifies facts such as 3 + 4 and 5 + 6, and the neighbor strategy teaches students to think of the lower number’s “twin fact” (e.g., 3 + 3) and then add one. Some strategies are more complex. For example, an abacus icon is used to teach the multiplication facts for 9. (You do not need a physical abacus.) The pictured abacus has rows of only nine beads each. The abacus image is then used to teach a strategy more complex than I can describe in this review. Parents need to study strategies like this one and be prepared to teach it themselves rather than reading straight from the instruction book.

I’ve reviewed several programs that teach strategies such as these for mastering math facts, and I believe that some of them are useful, and some are more bother than just memorizing the facts without a strategy. But you can decide for yourself which ones are useful. The games are dependent upon children knowing the math facts but not on the strategies used to arrive at their answers.

Overall, I think the games should be a great motivational tool, and the flexible timing makes them usable even for students with learning difficulties.

Note that the games are printed on demand and take up to a month to arrive. 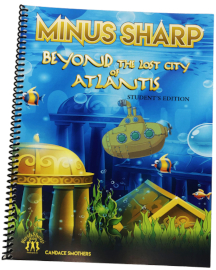 The four workbooks have corresponding teacher’s editions. You can order printed books with a spiral binding, color cover, and black-and-white interior pages, or you can order PDFs for huge savings. Workbook pages are reproducible for your family.

The teacher’s editions begin with an explanation of the primary strategy (algorithm), an alternative way of solving problems. This explanation includes research supporting the alternative method over the standard method. For instance, for adding columns of numbers, students are taught to use slashes whenever the numbers add up to a two-digit number, then continue adding with only the single digit (from the ones place value). Rather than the standard carrying method, students count the slashes and add them to the next column at the bottom rather than the top. This keeps the mental math more manageable and less likely to produce errors.  Multiplication uses an algorithm that has students multiply from left to right rather than the reverse which is commonly taught. It also has students use dots to keep track of place value in their answers. While one primary strategy is taught in each book, other strategies are also taught. For instance, students are taught several strategies for solving different types of division problems. Some of the strategies require students to do more mental math and write down less than they would using the common strategies.

All of the workbooks teach students to check their work by using a strategy called “reducing to a digit” (a strategy also called “casting out nines”). This checking strategy also requires mental math, but it can be more efficient than the typical checking strategies of reworking the same problem or applying the reverse operation.

The strategies used are different enough from those taught in most programs that I would recommend having students apply them within whatever math program they are using rather than also learning the commonly used algorithms.

Each workbook teaches increasingly difficult types of problems with instruction and examples. Sets of practice problems are provided at each step. The last half of each book includes timed-drill pages for students to work through.

The teacher’s editions have all student pages with overprinted answers along with the information about the strategy.

Time Sharp: Beyond the Journey to Saturn has an optional book, Bottle Top Travel Game, that helps students work on mental math skills. The book has images of bottle tops with numbers 2 through 100. Students need a partner who will use the book to check them as they mentally multiply a bottle top number by a number selected from 2 through 11. The book has the mental strategy written out unless it’s obvious, as for problems such as 3 x 30. The Bottle Top Travel Game is referenced on one page of the Time Sharp book, but it's not required.

The Math Sharp games are pricey, but they offer an appealing way to help students master their basic math facts. The workbooks teach problem-solving strategies that might be efficient and practical, but much depends on how each student’s mind works. One thing is certain. If students learn all the strategies taught in the workbooks, they should be better at mental math, and they will have more problem-solving options to draw upon.