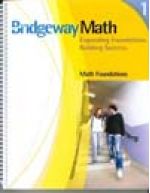 Bridgeway Math has a special one-year course that should be very useful for students in junior high who have a shaky foundation in math or gaps in their learning. It reviews basics that should have been learned in first grade through sixth or seventh grade, up through what I would consider a pre-pre-algebra level.

This is a mastery course along the same lines as Alpha Omega’s LifePacs and A.C.E.’s Paces. Students can work independently through worktexts which contain instruction, practice problems, and self-assessments. Self-assessments are taken by students for them to determine for themselves whether or not they are ready to take the actual tests. Tests are given to students by the teacher. (In Bridgeway Math, tests need to be removed from the back of the student books in advance.) No teaching is required.

The Success Math PAKs function like units in a typical textbook. However, a student should not progress to the next unit/PAK without achieving a score of 80% or higher on the previous unit.

Bridgeway Math 1 is designed to bring older students up to speed by reviewing basic math concepts that might not have been mastered. It begins with the concept of place value then moves immediately into addition with carrying. It skips over simple addition and subtraction since those usually aren’t areas of difficulty. It works on rounding, estimating, multiplication and division—again jumping past basic math facts.

Similarly, the first worktext takes students through fractions (including finding least common denominators), decimals, and many types of word problems. Instruction on concepts is brief. It teaches the algorithms or strategies without expanding into conceptual explanations as to why they work.

Bridgeway Math 1 might work if students just need to apply themselves to mastering lower level math skills. However, students who have struggled with math in the past might not have grasped concepts when they were taught in a previous course, and they might need a hands-on approach or another form of explanation this time around as well. This book gives parents an easy way to breeze through a number of years of math instruction and, at the very least, identify problem areas. As long as additional instruction is provided when needed, this is a relatively efficient way to help a student catch up. I can see this first book as also being useful in situations where students have been switched from program to program and might have missed something along the way. Because Bridgeway Math assumes that students have already been through basic math and it skips some foundational topics like addition and subtraction facts, it cannot serve as your primary source of instruction for students have never been taught those topics.

The final Success Math PAK in both worktexts reviews concepts taught throughout each respective books.

Worktexts, printed in black-and-white, are consumable and include enough space for students to show their work for each problem. Scattered black-and-white illustrations follow a different theme in each Success Math PAK. The themes are loosely connected to math to show how math is used in real life. For example, space shuttles are the theme in the first PAK, and images gradually tell the story of space shuttles. Images don’t tie directly to the math on a particular page. Some of the other themes are the Leaning Tower of Pisa, sports, music, the World Trade Center’s twin towers, and volcanoes.

In addition to the illustrations, the worktexts also feature occasional quotes from well-known people such as F. Scott Fitzgerald’s remark, “Never confuse a single defeat with a final defeat.” (I’m not convinced that these are helpful.)

You can purchase the worktexts individually if you don’t need both, but you will still need the same teacher answer key with either book.

This course caught my attention because it is one of the rare options for helping students catch up in math. Its self-instructional design should be great for self-motivated students who prefer to work on their own.