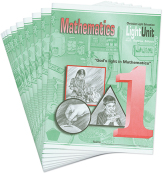 Christian Light Education's (CLE) Mathematics program offers solid math instruction that teaches from a Christian perspective at a very reasonable price. Each grade level course includes a one- or two-volume teacher’s guide and ten LightUnit student workbooks. (Third grade has a single volume for teacher's guide.) A few other items are either required or optional, especially in the early grades.

It uses manipulatives and visual aids frequently in first grade, but decreases their use in subsequent grade levels. By fourth grade, manipulatives are used only a few times. in the first grade program, manipulatives might be counting blocks, craft sticks, or whatever you choose to use for the most part, so there are no expensive manipulatives required. First graders also work with real coins and a teaching clock. (Almost any geared clock face will work, but inexpensive teaching clocks are best.) They also have two supplemental workbooks: the My Calendar Book, which requires students to observe the weather and sometimes measure the temperature, and My Counting Book with counting exercises and number puzzles. My Calendar Book is optional, but it would probably be very worthwhile to use for those living in areas where there are significant weather changes, unlike the situation in southern California where I live. A laminated counting chart is also used for the first two grade levels.

Daily flash card practice and speed drills help students master the math facts. In first and second grade, students work on the addition and subtraction facts. Second graders also begin to learn the multiplication facts. Mental math exercises are included beginning at the end of second grade and continuing throughout all levels through eighth grade.

CLE sells customized Addition and Subtraction Flash Cards that are coded and come with dividers for setting up a systematic approach for drill and review that both circulates the cards and arranges them for daily drills. While CLE sells multiplication and division flash cards, these are fairly standard, so you can use another set if you already have them.

The speed drills are found at the back of each LightUnit book for grades one through five and then in the first LightUnit of grade six.

The first LightUnit of each course after first grade thoroughly reviews previously taught concepts and facts with pre-tests and practice sets. The purpose is both for review after a "summer break" and as a diagnostic test for those who might just be starting the CLE program. If students do well on each of the pre-tests, they can skip the practice sets and move on.

Instructions in the first grade teacher’s guide highlight a fundamental principle in CLE curriculum. The teacher’s guides says, “First and most important is to teach the students prompt obedience and orderliness. Train your students to listen and follow along carefully as you proceed with an activity. Don’t allow them to do things in their own way and their own time.” It continues with a description of an activity to use to teach prompt obedience (Mathematics 1 Teacher’s Guide, p. viii). This stands in contrast to some other programs that encourage students to explore and figure things out in their own fashion.

CLE Mathematics requires some lesson preparation, especially for first grade level, but it should not take long. At the youngest levels, the program needs to be taught; students might listen to a story problem that teacher reads from the teacher’s guide, then write only the numerals for the problem in their LightUnit. Beyond first grade, students can do much more of their work independently. However, parents still need to check the teacher’s guide for occasional instructional information they need to convey to students.

Quizzes and tests are contained within each LightUnit book. Tests should probably be removed in advance, but you can also pull out quizzes if need be. Teacher’s guides include answers overprinted on reduced images of student pages. Separate sets of answer keys are also available but they are not needed. In addition to instructional information and answers, teacher’s editions also have alternate tests, extra practice sheets, and appendices with helpful information. Content of the teacher’s editions varies from depending upon the grade level.

CLE Mathematics is not aligned exactly with the Common Cores Standards but it is close. For example, CLE exceeds the standards in its introduction of multiplication by three-digit multipliers in fourth grade while it trails the standards by delaying multiplication of fractions by whole numbers until fifth grade. By the end of eighth grade, CLE provides more thorough coverage of real life math applications than do most programs. It teaches a good deal of algebra and geometry by the end of eighth grade, even covering some trigonometry. In all, the junior high level courses do an especially good job of preparing students for building trades, farming, and entrepreneurship. CLE Mathematics as a whole provides thorough coverage of required math concepts and goes beyond in some areas. While it includes some critical thinking, this area does not get as much emphasis as is called for the in the Common Core Standards.

CLE publishes Canadian versions of the courses for first and second grades that teach Canadian currency rather than U.S. In addition, both U.S. standard and metric measurement systems are taught simultaneously throughout the program so that students become fluent in both.

Christian Light Education's Mennonite roots are evident in the illustrations throughout the series. The content is influenced by the fact that many Mennonites live in rural areas rather than cities and suburbs. Each course has a theme that runs through the lessons, showing up primarily in the word problems. For example, in the fourth grade course, a geographical theme, has each LightUnit highlighting a different area of the world. In the seventh and eighth grade courses, each LightUnit features an occupation, vocation, or business, each of which is operated by Christians. Some explicitly Christian content is inlcuded but it appears very sporadically.

High school courses are also available, but I did not review them.