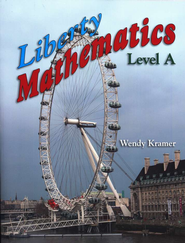 The Liberty Mathematics series for kindergarten through second grade is an inexpensive, traditional math program. It stresses the mastery of computation skills with frequent practice and review. It goes beyond what the Common Core Standards call for at each grade level in some areas. But other topics that the Common Core shifts down to younger grade levels (what most of us would consider peripheral topics) are left for higher grade levels to teach.

Core items for each level are the student worktext and the teacher’s manual. The consumable worktexts include lesson instructions, examples, and practice problems. Inexpensive teacher’s manuals for each level provide helpful tips for lesson presentation, hands-on activities, games, and drills, most of which are optional. They do not serve as answer keys. Answers to workbook problems are obvious enough that no answer keys are needed. Teacher’s manuals generally present information that applies to entire units rather than individual lessons, although there are some teaching tips that are lesson specific.

Some hands-on items are suggested although they are not essential to the program. These are flashcards, dominoes or dot cards, an abacus, coins and dollar bills, a ruler, and a “Judy” clock with movable hands.

Christian Liberty Press publishes a set of flash cards for Level K for drilling math facts while Level A has a separate Drill Book. (Level B incorporates drill pages within the student worktext.)

To keep the cost down, the worktexts have fewer pages than programs like Horizon Math. Since the topics taught in both programs are very similar, to cover the material, the Liberty Mathematics worktexts have more content printed on each page. Individual pages appear crowded with content in comparison to some other programs. Student worktexts are printed in black and white with one additional color. Pages frequently have clip art-type illustrations or graphic images such as dominoes, coins, and clock faces.

The three courses each have just a few instances of Christian content. The introduction to each level, written to parents and teachers, is the most obvious, but there other rare instances such as a mention of Noah bringing two of each animal into the ark in a lesson teaching about the number two.

Level K is more advanced than some math programs, but about the same level as Horizons Math K. (Horizons goes slightly beyond Liberty Mathematics Level K.) It begins by teaching the numbers zero through ten—identifying and writing the numerals as well as counting. A number line is frequently featured at the top of the page and is used as a teaching tool. Level K continues with addition families up through sums that equal ten. Subtraction is taught hand in hand with addition. Students learn to count to 100 by ones, twos, fives, and tens—sometimes with pictures of coins or real coins. In addition, Level K covers place value (ones and tens), word problems, telling time, greater than/less than, cardinal numbers, measurement, story problems, the calendar and introductory fractions (halves and thirds).

Level A, for first grade, reviews what was taught in Level K within the first 38 pages, then introduces more challenging addition and subtraction including borrowing and carrying. While Level A also teaches place value (ones, tens, hundreds), time telling, the calendar, seasons, thermometers, tallies and charts, money, measurement, geometric shapes, and fractions (up to eighths), it spends the majority of the time on mastery of addition and subtraction facts and computation skills. The Drill Book supports that goal. Drills include both practice and speed drills that are timed. If this seems like too much written work for your child, you might consider substituting use of a supplemental computer games or programs that provides the same type of drill on math facts.

Level B, for second grade, again reviews previously taught material. But it quickly moves on to new concepts such as four-column addition and subtraction, making change, rounding, multiplication up through 5 x 12, division up through 60 ÷ 5, charts and graphs, numerators and denominators in fractions, more-complex word problems, balanced equations, and work with maps. It’s ahead of the Common Core Standards as well as ahead of most second grade programs with its introduction of division. One of the few areas where it lags behind the standards is in geometry since it does not discuss the number of angles in quadrilaterals.

While courses are labeled with letters that are meant to correspond with grade levels, the letter designations make them easier to use at other grade levels if needed, particularly with students who need to progress at a slower pace.

Overall, Liberty Mathematics covers most of the Common Core Standards, but much more time is spent on basic computations skills than the more peripheral math concepts. It’s a challenging program, but it’s easy for parents to use with minimal preparation and planning. Checking student work without answer keys takes a little more time, but this shouldn’t be an issue at all until Level B. The biggest drawbacks for this series are likely to be the busy-ness of each page and relatively plain look of the lessons. But the low cost, challenging content, and ease of use should easily outweigh the drawbacks in most situations.