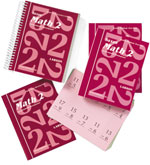 The publishers of Saxon Math have developed math materials for the early grades that are extremely different from the rest of their program. The K-3 Saxon Math courses stand apart from upper level books with totally different formats. (Note that a new fourth grade course by the same author is also available, but only for classrooms at this time. Also, Saxon publishes Saxon Math Intermediate 3 by Stephen Hake which is more like Math 54 and Math 65.)

The K-3 courses were originally written for classroom use. In the home school versions, the teacher's manuals, key components at each level, have been rewritten to eliminate some of the classroom activities.

The program is somewhat similar to Cornerstone Curriculum's Making Math Meaningful in format with a script for the teacher to follow and the use of manipulatives to teach concepts. Levels K-3 all use manipulatives—e.g., bear counters, MathLink Cubes, geoboard, tangrams, etc.

Unlike Making Math Meaningful, this program tries to cover a plethora of math related concepts in keeping with the new math standards accepted and promoted within the government-controlled educational system. That is not to say it is a bad program, but it does spend a lot of time covering topics children pick up quite simply on their own or with minimal amount of instruction. For example, children are taught in math lessons how to identify the weather, morning, afternoon, evening, night, days of the week, seasons, and months.

The program does teach traditional math skills but at a slower pace than programs such as A Beka, Horizons, or Bob Jones, most likely because it is trying to accomplish so many other objectives from the national math standards. For example, regrouping for addition is introduced in three lessons in Saxon Math 1 Level 1, but Level 2 does not return to the concept until the middle of the year. This is slower progress on this vital concept than in programs such as A Beka's or Alpha Omega's.

On the plus side, the incremental approach which Saxon uses at upper levels is still very evident in the early levels. Children review previously learned concepts continually, while adding new learning in small segments that build upon each other.

Other points in its favor are:

The bottom line is that the program does teach math and does use some good methods to do so, but it might not be the most efficient way to accomplish your goals.

Each day's lesson begins with "The Meeting" where parents direct discussion and activity related to time, temperature, money, counting, patterns, and problem solving. After "The Meeting," a new concept is introduced (usually with manipulatives) and previously taught concepts are reviewed.

In addition to the homeschool kit for each level, you need to purchase manipulatives. Saxon sells a manipulative kit that includes most of those you will need—items like dominoes, color tiles, geoboards, linking cubes, and teddy bear counters. You will also need a number line, demonstration clock, set of geometric solids, a meter/yard stick, and an outdoor thermometer. These same manipulatives are used for all levels.

While the program does a thorough job of covering a multitude of concepts, the price and the time required to use the program might discourage many home educators from using it. Also, those who prefer more natural learning are likely to be uncomfortable with all of the artificial classroom-type presentations of knowledge and skills that children can acquire quite naturally just being around the home and interacting with their parents.

The kindergarten program differs from the other Saxon courses in that it has no student books as do the grades 1 through 3 programs. The home school kit for kindergarten includes the teacher's manual and the Meeting Book. Level K operates totally from teacher-directed instruction and activity, so this is not a program for independent learning. Optional written work comes from reproducible master sheets in the teacher's manual. Oral counting, acting out addition and subtraction stories, sorting, identifying and counting coins, measuring, and telling time are the types of activities that replace workbooks.

After beginning each lesson with "The Meeting," you use "The Lesson" to introduce a new concept that will be reviewed and practiced over and over again in future practice sessions. During the lesson children complete one page in their workbook. Later in the day they are to do a second workbook page on their own. Frequent assessments, both written and oral, verify their mastery of the material. This program requires preparation and presentation time. It is not designed for independent student work other than the second worksheet page.

The home study kit for Level 1 also includes The Meeting Book, two student workbooks (Parts One and Two), and fact cards. The assessment pages are the most obvious holdover from the original classroom-formatted program with space for recording progress for 32 students.

Level 2 teaches renaming for subtraction, multiplication by numbers up to 5, and division by the number 2. As with the other levels, it teaches a multitude of math-related concepts including such topics as identifying lines of symmetry and oblique line segments, graphing ordered pairs on a coordinate plane, conducting surveys, and creating and reading Venn diagrams. Aside from, or maybe in spite of all the extras covered, the program does a decent job teaching basic arithmetic. Manipulatives need to be ordered separately as described above.

At third grade level, the scope and sequence is running slightly behind those of the major Christian publishers with the exception of School of Tomorrow (which lags quite a distance behind) and BJUP with which it is almost comparable. It compares almost straight across with ScottForesman's Exploring Mathematics for Grade 3. Children perform all four basic functions, but multiplication and division are practiced with only single-digit multipliers and divisors. The slower progression in these areas is compensated for by introduction of other concepts such as social studies and science connections to mathematics, work with positive and negative numbers, learning about lines of symmetry, and graphing ordered pairs on coordinate graphs. Manipulatives must be ordered separately.