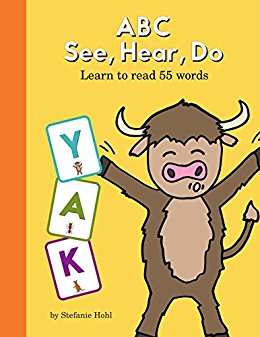 The ABC See, Hear, Do series makes it simple to teach beginning reading skills in a way that addresses the needs of auditory, visual, and kinesthetic learners. Five books teach reading skills and two supplementary books can be used along with the first book for writing practice and coloring. The titles are:

Children should already have been introduced to the letters of the alphabet before starting the first book, ABC See, Hear, Do. It teaches the sounds of letters in groups of four letters at a time then introduces three-letter words using only those letters. The words taught are all vowel-consonant-vowel words. For example, the first four letters taught are c, a, m, and t. The words taught are cat and mat. If a child is not yet ready to blend sounds into words, don’t worry. Just continue to teach the individual letters and return later to work on blending.

Each letter is taught with a colorful, cartoon character illustration and hand motions. The letter c is illustrated with a cat with outstretched claws. At the top of the page, it shows “C…c…C”—both uppercase and lowercase letters. The parent or teacher is to pronounce the sound of the letter rather than its name. At the bottom of the page, the lesson presents the hand motion: “Make your hands like claws and scratch.” Similarly, a flamingo illustrates the letter f, and its motion is “Flap your arms like a flamingo.” When words are presented, the small image of the animal for each letter is immediately below each letter as a visual reminder of the action and sound of the letter. This method of presentation is likely to be effective with children whether they learn best by hearing, seeing, or doing, since it involves all three.

The set of practice words for each new group of letters increases to four words per set, then five. On these pages, words are all presented in uppercase letters, which is unusual. But the goal is to familiarize children with both uppercase and lowercase forms. At the end of the book, two pages have lists of words for practice, with 48 words per page. One page features words printed with all uppercase letters and the other presents a different set of words, all with lowercase letters. This book teaches 55 words.

ABC See, Hear, Do: Writing Practice helps children learn to print both lowercase and uppercase letters individually, so it fits perfectly alongside or after the first book, ABC See, Hear, Do.

ABC See, Hear, Do: Coloring Book also works best alongside the first book since pages are blackline versions of the pages within the first book that teach individual letters. Pages include the same text as the pages in the instructional book.

ABC See, Hear, Do 2: Blended Beginning Sounds teaches consonant digraphs (i.e., two-letter phonograms) such as bl, sc, and th, all used in short-vowel words like blot, scab, and that. As with the first book, cartoon characters and actions help children remember the phonogram. For example, the phonogram cl is illustrated with a clam, and the motion is, “Palms together, open and close your hands like a clam.” Three new words are presented for every phonogram, and a list of 40 practice words is at the back. This book sticks with only lowercase letters rather than mixing both cases.

ABC See, Hear, Do 3: Blended Ending Sounds teaches another 51 words, focusing this time on consonant digraphs at the ends of words. Students will learn words such and duck, back, and rock.

ABC See, Hear, Do 5: Sight Words wraps up the series by teaching 24 high-frequency sight words such as you, is, and was.

Kindle versions are available for the five reading instruction books, and they will work fine as long as you have a device with a color display rather than black and white.

The ABC See, Hear, Do series offers a simple, interactive way to teach reading that should be enjoyable for both children and their parents.