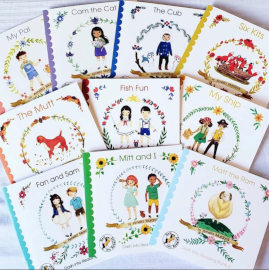 Dash into Learning teaches reading through phonics and sight words but with less direct instruction than we find in many reading programs. It can be used as a stand-alone phonics program or alongside another program. The program consists of three sets of readers, and each set has ten readers, a sheet of stickers, a brief parent guide, and a tote bag. I recommend that you use the optional activity packs.

The artwork on the covers and inside the readers will probably grab your attention first. The delightful, full-color drawings feature children, animals, and the occasional adult, with diversity in their ethnicities—the publisher’s website describes the drawings as “wholesome and classic.” The first two sets of readers feature illustrations on every page. The third set generally has only one illustration for each two-page spread.

The content is secular, but the stories often focus on the positive development of character. For instance, one story begins with two children who have competing lemonade stands. The children discover that one is better at baking and the other at making lemonade, so they join forces to have one stand that sells both baked goods and lemonade. Another story celebrates the differences between a big brother and his little brother.

The new concepts to be learned and the five steps are presented on just the first few pages of each reader. The story that follows provides children with practice with the new words as well as those learned previously.

The first of the five steps is to introduce new phonograms. The second step is teaching a few sight words. The third step is blending phonograms with a long line drawn between them such as oa_____t. The fourth step in most books repeats the phonograms from the third step but without the underline and space, e.g., oat. The fifth step has children blend or read entire words. A few of the readers have only three or four steps and different activities. For instance, some books in the second set use the third step to teach words with a silent e rather than providing blending practice.

A sheet of small stickers with the faces of children and animals from the stories comes with each set of readers. There are spaces on the instructional pages in each reader for children to put a sticker as they master each step.

Children do not need to know the alphabet when they begin the first reader. The program teaches the sounds of phonograms rather than introducing the sounds of the letters of the alphabet. However, the lessons move along quickly, and I think a child with no prior knowledge of letters and sounds will find the pace too fast. Using the activity packs I describe below will provide your child with more practice and reinforcement, and you can more easily slow the pace of instruction. Or you can use these readers alongside another phonics program.

The program begins in the same way many phonics programs do, by teaching the sounds of the consonants n, s, f, m, r, and t along with short a. It then uses two- and three-letter words composed of those letters. It also introduces the sight words I, the, is, and A. Throughout the program, it teaches many words as sight words that children will eventually be able to sound out.

The first three readers keep the reading pretty simple with only short-a and short-i words. But short-o words are not introduced until the tenth reader in the first set. Most phonics programs teach all of the short vowels before introducing phonograms like th and sh. However, the order is changed somewhat in this program. The third reader introduces the phonogram th and words such as thin, that, and this, and the fifth reader presents the phonogram sh and words such as rush and fish.

The progression in the second set also has some unusual features. The first reader in this set teaches only two new phonograms: ch and ee. Children then read words like bunch, feeds, and tree. In addition, this reader also includes the words food and stick even though the phonograms oo and ck have not yet been taught. Parents need to watch for unfamiliar words and phonograms and either just tell children the word or explain the phonogram on the spot.

The level of reading difficulty ramps up significantly in the third set. The first reader in this set often has a full page of text with multiple paragraphs, and children will read sentences such as, “Something is hurting the plants.” The eighth reader has sentences such as, “Let’s go on an expedition to find Sebastian.” The parent guide for the third set has lists of extra words for students to practice for each of the readers.

None of the three parent guides provide guidance on teaching the aspects of reading, such as punctuation, quotations, contractions, and suffixes. And no distinctions are made for some of the more confusing phonograms with multiple sounds, such as oo and ough in words like book, moon, rough, and though. 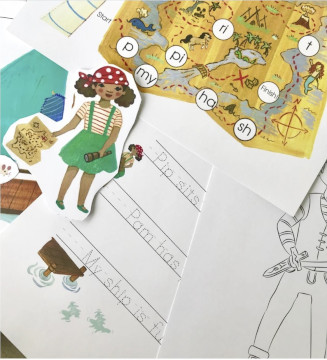 The activities vary in each pack, reflecting the gradual growth in reading and writing skills. The packs include pages for activities such as coloring, worksheets, games, crafts, recipes, drawing, paper dolls with play-mat scenes, tracing, and copywork. The bundle for the first set of readers includes an extra pack with five pages of activities to help children work on distinguishing b and d.

You can purchase the activity packs separately, but the most economical option is to purchase bundles that include the readers and their activity packs.

The Dash into Learning program emphasizes learning phonics by having children read rather than spending a lot of time on instruction. Many parents will be comfortable filling in the gaps for reading instruction as needed, but those who are not should use the readers alongside a more comprehensive program. However you use them, the Dash into Learning books are lovely and should appeal to all audiences.