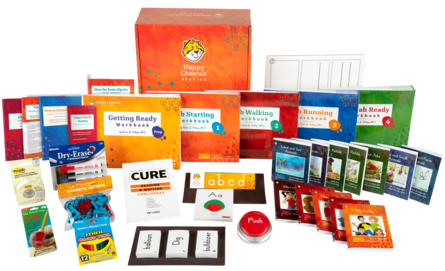 The Happy Cheetah™ reading program was created by Dr. Karen Holinga, author of the SpellingYouSee series. Dr. Holinga has a doctorate in developmental reading plus years of experience as a classroom teacher, a tutor of children with learning disabilities, and a homeschooling mom. She brings that wealth of experience to the development of this program, so it is based upon what she knows will work. However, this program is unusual in both design and methodology, and to explain why that is so, I have written a rather lengthy review.

Happy Cheetah Reading teaches both phonics and sight words for reading, and it also teaches printing, spelling, and beginning language arts (e.g., sentence structure, punctuation, and rhyming words). The course is designed for use with students who struggle to learn to read, whatever their age, but it can also be used with students who do not struggle. It does not require students to memorize rules or take tests. Instead, it involves continual interaction between the parent and the student using auditory, visual, and kinesthetic methods.

The parent is instructed to give constant encouragement. Children should not work to the point of frustration, so lessons should be kept to no more than 20 minutes a day, and parents can choose when to stop. Students are to receive only positive feedback. The Happy Cheetah Reading kit even includes a large, battery-operated pushbutton that says “easy,” and the parent or child can push it at any time.

Twelve readers that are included in the course are used along with the second through fifth coursebooks. Subject matter in the readers varies, with some based on family and activities, some on non-fiction topics such as birds and animals, and some on fairy tales. The readers all have full-color illustrations, and I especially like the artwork by Jeanie Egolf and  C.J. Neely in the fourth through twelfth readers.

A set of lowercase magnetic letters (with blue consonants and red vowels) is introduced at the beginning of the second coursebook along with three card decks for games.

The program is simple for parents to use—follow the instructions for each section with no advanced preparation required. The amount of time required to complete the program will vary from child to child, so there are no set lesson plans for what has to be completed each day. It should take at least two years to complete the entire program, and more likely three years or longer, depending upon the situation.

The program comes with a number of pamphlets such as “How the Brain Hijacks Your Child’s Ability to Learn” and a book, Dr. Karen’s Cure for Reading & Writing Challenges. These might prove helpful to parents whose children have learning difficulties.

The first book, Getting Ready Workbook Prep, is divided into five sections. The first section begins by teaching how to write uppercase letters. Students will first write in the air with their finger. Then they will write three times on the whiteboard that comes with the set. The whiteboard has three sections: with white space, one line, and two lines. Students gradually learn how to control the letter placement on lines after they learn how to form the letter. (The two-line format has a bottom line and a mid-line, but no top-line as we usually see for young students.) After writing on the whiteboard, students will write on lines on two lines on their workbook pages. This two-line format for writing is used throughout the course, including on all coursebook pages.

Instruction for each letter of the alphabet is accompanied by a single exercise, such as matching pictures to the first letter of their names (e.g., matching a picture of a cat with “c”). Some of these exercises depend upon a child knowing the sounds of each letter. Even though the program does not state prerequisites, children should already have some familiarity with the alphabet and the sounds of letters. If not, you will need to teach the sounds of the letters yourself as children learn to print. Near the front of the book, there is an alphabet chart with letters and pictures for key words that you might use to teach the sounds of letters, and there is also a set of alphabet cards with the same key word pictures that you can use.

The second section of this book teaches children how to write the lowercase letters in the same way they learned the uppercase letters. The exercises are also similar.

The third section takes a different approach than I’ve seen in any other beginning reading program at this stage. Each page has students trace and copy both lowercase and uppercase forms of one letter of the alphabet. Then students will work on a complete sentence that includes a word that begins with the featured letter of the alphabet, such as “Your cat is gray” for the letter “c.” The parent will read the sentence aloud before students begin the copywork, pointing to the beginning letter of each word while saying them to help students associate the sounds with the words. Students are supposed to read the sentence back to the parent, although they will almost certainly be reading by memory rather than decoding all of the words at this point. While the child is tracing and copying, you will help them focus on the sounds of the letters. This copywork activity indirectly teaches basic sentence structure and punctuation.

The fourth (and largest) section of the coursebook focuses on the sounds of all of the letters in short words. With parental assistance, students will sound out and write the letters of short-vowel words such as cat, hat, and hid in “letter boxes” on the coursebook pages. (Letter boxes are sized to fit each letter, giving the child visual clues for the correct letters.) They will also practice tracing and writing letters and then complete an additional activity to identify the beginning sounds of words.

The fifth section of the book has just a few pages where students practice writing numbers from zero to nine.

The Cub Starting Workbook 1 has 90 lessons. Six of those lessons are used to introduce new stories from the three readers, reading half of the stories in one of the readers for each introductory lesson. After each of those six lessons, the other lessons revisit individual stories with a number of activities per lesson. While children will work on words that contain a particular short vowel in each lesson, within the same lessons they also learn to read words with long vowels in a sight-word fashion. For example, in Lesson 19 the phonetic focus is on short-o words, but students will read a story that includes the sentence, “See Abe roll,” that has three words with long-vowel sounds. As is true throughout the program, parents are instructed to help students whenever they struggle rather than expect them to be able to read every word.

The three card decks that come with the program are all used along with the second coursebook. The card decks introduce the words used in the three corresponding readers, and game instructions for the cards are at the back of the coursebook.

Aside from the six lessons that introduce stories in the readers, the other lessons are not identical. However, they often repeat many of the same elements. In one typical lesson, the student will reread three previous stories and then read one new one. (If the student struggles at all, the parent is invited to read any of the stories first.) Then the parent and child work together with magnetic letters, learning to build new words by changing just one letter of a word each time. Next, they play a game with the card decks. After these activities that help familiarize children with words in the readers, the student will read the same new story that was introduced in the reader, but they will read it from the workbook, where it is presented without illustrations. After that, a series of brief exercises has students decide which of two sentences makes sense, visually determine which words are written correctly with uppercase and lowercase letters (e.g., roLL or roll), and identify rhyming words. For most lessons, the entire second page is for tracing and copywork for both individual letters and complete sentences.

Other lessons have students write words in letter boxes (only three-letter words) as they did in the first coursebook. Review lessons, as well as six pages at the back of the book, provide lines where children practice writing their own first and last names.

Cub Walking Workbook 2 is shorter than the other coursebooks. It correlates with only two of the readers and has 64 lessons. Lessons are very similar to those in the previous coursebook, although children will work with the magnetic letters to form long-vowel words and words with consonant digraphs such as “ch” and “sh.” Children will sound out letters to write four-letter words in letter boxes. This coursebook also introduces spelling review where students first copy words then try to write them without seeing the models—like a spelling test. However, this is not to be treated like a test, since parents should help the child as much as he or she needs.

In Cub Running Workbook 3, lessons follow the same format as in the previous book. There are four readers that correlate with 112 lessons in this coursebook. Copywork usually consists of three complete sentences. Reflecting the continued mixing of phonetic and sight words, a typical spelling review list includes words such as catch, eat, love, my, and nuts.

Cheetah Ready Workbook 4 continues with the same lesson format but with one important difference. Instead of using magnetic letters and creating new words, students now work on identifying “chunks”—phonetic components within words. Chunks are taught in groups:

Children will mark up the stories from their readers that are reprinted in the coursebook. They will use the colored pencils that come with the kit: blue for vowel chunks, red for bossy-r chunks, and green for endings. An answer key is at the back of the book to help you quickly check to see if your child has missed any of these.

When children finish Happy Cheetah Reading, they should be about mid-third-grade level and should be able to transition to most other reading and language arts programs for third grade that do not require memorization of a set of rules. (You would not transition to a program such as All About Reading or The Logic of English since both require prior knowledge or rules.)

If parents want to use Dr. Holinga’s SpellingYouSee program, they can transition directly into Level D Americana. That program continues to cover more challenging phonetic concepts using the same chunking technique introduced in Happy Cheetah Reading.  So continuing with SpellingYouSee is a great way to reinforce and complete the phonics instruction.

The methodology of Happy Cheetah Reading is unique, but the program's features such as brief lessons, positive feedback, repetition, predictable activities, and no rules to memorize should help children who struggle with reading to become successful readers.