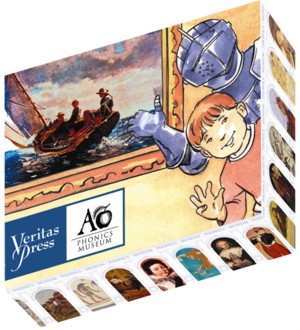 Veritas Press has come up with a somewhat original way to teach phonics with Phonics Museum. This is a true multi-sensory program with its use of songs, stories, games, puzzle pieces for combining letters, flashcards, a "pop-up museum" with pictures to hang on its walls, paper dolls (to visit the museum), colorful original readers, a "museum bag," and traditional workbooks. You can buy it as a physical product or as an app. My review is of the physical product, although the app integrates most features of the physical program.

Phonics Museum is a solid phonics-based program that uses tried and true methodology. Rather than choose between consonant-vowel and vowel-consonant syllables for beginning blending, the program uses both. The kindergarten program introduces the letters and sounds and teaches how to write both upper and lower case letters. Blending begins early with lesson 20, and in lesson 29 children are reading three-letter words using only those letters of the alphabet they have learned thus far. The program continues introducing letters and sounds, using a word-family approach through the introductory lessons. By lesson 49, children are reading the first of the thirty-one primers that come with the program.

The museum theme and the inclusion of biblical and historical subject matter in the readers set this program apart from others. The cute Alphabet Quest storybook introduces the museum theme at the beginning. Then it is integrated with "The Museum Song" on the audio CD, the alphabet/key word cards that feature fine art reproductions (e.g., Van Gogh's Sunflowers for "y/yellow"), small "art" cards that students mount on the pop-up museum walls, a "museum bag" for collecting items beginning with the letter to be learned, art coloring pages in student workbooks, and continual references back to the Alphabet Quest story and "The Museum Song."

The thirty-one primers that come with the program are quite unusual. Most stories are based on Scripture and history, although sometimes with an indirect connection. For example, one simple primer about a dog, a hog, a rat, a ram, and a hen reads like other primers trying to work with comparable vocabulary. However, the story is taking place during a Roman "triumph" procession and the illustrations mimic Roman mosaics.

It's refreshing to read primers that have content worth reading. Titles and subject matter of some of the primers are Dan of the Den (Daniel in the Lion's Den from the Bible), Pepin the Not-Big (Pepin the Short, ruler of the Franks in the eighth century), To the Rim of the Map (the Pilgrims on the Mayflower), The Sword of Rob Roy (the story of Rob Roy of Scotland), Up in the Sky (the Wright brothers), Bright Night: the Story of Anne Bradstreet, The Brave Monk (Martin Luther), and Fathers' Faith (stories of Saints Augustine of Hippo, Boniface, John Chrysostom, and Ambrose). A few of the stories are more unusual. Ella Sings Jazz is about the famous singer Ella Fitzgerald, and Red Hood is a James Bond type spy story with artwork inspired by the bold graphics of Soviet posters of the 1920s and 1930s. The authors write from a Reformed Protestant perspective that comes through very strongly in a number of the stories.

The quality of the stories and artwork varies with different authors and artists for many of the primers. In terms of artwork, some are absolutely beautiful, and most are, at the least, very well done. The variety of artistic styles actually plays into the museum theme if you take time to talk about it with your children.

As far as the stories, they suffer sometimes from the boundaries of limited vocabulary. For example Pepin the Not-Big is a tortured way of avoiding the word "short" since "sh" isn't taught before that point. Pan and the Mad Man seems to me the weakest of the lot with a story based on the Greek god Pan that is limited to single-syllable, short "a" words. On the other hand, as the stories progress, they are far less rigid and controlled than most primers. So children get to read words like buccaneers, astronauts, module, Aurelius, thicket, Galahad, and hydra that are generally banned from beginning readers.

The companion CD that comes with the program features seventeen original songs plus additional tracks with only the music for some of the songs. Besides "The Museum Song," "The Alphabet Song," and "The Alphabet Chase," the others teach vowels and specific phonetic concepts such as the sounds of "y" in the song "Funny Butterfly" and final consonant blends in "Act Like a Clown." Complete sheet music for all songs is in each Teacher Manual.

Decks of game cards for the "Archives Game" are included for each level, plus there are decks of phonogram playing cards for playing "Percival's Pairs." The pop-up museum also flattens to a game board. As if that's not enough games, a bingo type game is included in each teacher manual.

One innovative component I really like is the sturdy puzzle-piece letters and phonograms that children join to learn blending. These are more fun to use than regular flashcards.

There is one student workbook for each level, and these are quite substantial—over 500 pages each. But this isn't busy work or an excessive amount of writing and seatwork. Workbooks have typical workbook activities like circling pictures representing the correct sound, but they also have craft pages, letter formation practice, blending practice, puzzles, copywork pages, and the aforementioned art coloring pages, each with a facing page that has information on the artist and/or artwork represented.

Detailed lesson plans are provided in the teacher manual for each level. Manuals have small reproductions of student pages to accompany step-by-step instructions. Although lessons are not scripted, it's pretty close to the same thing.

Lesson plans are written for classroom settings, so homeschoolers will have to frequently adapt for their own situation. If you are fortunate enough to have two children working through the program together, it will be easier. If not, you might require fewer responses of your child since in the classroom setting responses are given by many children rather than just one. Unless your child loves to sing along to the recordings on his or her own, you'll need to lend your voice. When the program instructs children to read stories in "round robin" fashion, you will have to choose how much of the reading you might assist with yourself.

You will need to "construct" some items for the program. Letter cards at the back of the kindergarten teacher manual need to be copied onto cardstock, possibly laminated, then cut apart. Likewise with a letter strip for the student's desk and some other lesson aids in the back of the manuals. The kit includes a decal that you are to affix to a cloth bag yourself to create the "museum bag."

Everything I've mentioned plus game parts and even paper clips come packaged in a sturdy box. High quality printing, artwork, and materials are used for every component. You can purchase extra student workbooks and primers for additional students.

This review is of the Combo Kit that covers both kindergarten and first grade. Separate kits are available for both levels, but the cost is substantially higher. Unlike some other programs, the first grade program continues from where it left off in kindergarten rather than reviewing beginning phonics. So you really need both levels to get the complete program. That makes the Combo Kit the appropriate choice for just about every situation. You can also click here if you want to check out the app rather than the physical program.

The museum theme, choice of history topics in the primers, integration of the fine arts, and overall approach are particularly supportive of classical education, making this a good choice for those intending to implement a classical Christian (Protestant) approach to educate their children. However, even those choosing other approaches should find Phonics Museum a rich alternative to many other phonics programs.