Ring Around the Phonics

Ring Around the Phonics 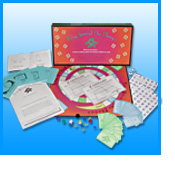 The large game board has a spiral game path upon which children move their pawns. But the game is extremely flexible since you select which letters and sounds are to be included each time the game is played. You do this by selecting from the plastic, peel-and-stick, static-cling letters for each level. (These letters work similar to Colorforms ™.) Level one has 119 letter “tiles” for the letters and digraphs s, a, t, b, u, m, o, long a, h, r, d, e, c, n, I, g, and th. As students move around the board they must say the sounds of the letters they pass. Children pick up small, plastic “rings of knowledge” that are placed on their pawns as they pass those spaces. If they land on a “blue card” space, they select a blue card and answer a question such as, “If you could be any animal, what would you be?” If they land on a “green card” space, they choose a card and perform an action such as, “Stand up and do five jumping jacks.” The cards do not add to the phonics instruction. If I were playing with only one or two children, I would probably skip the cards and just focus on the phonics. In response to this comment of mine, the publishers says, "The cards not only help children release energy (necessary for some children to be able to focus), but they also teach communication and listening skills." So If the cards are useful to you for these purposes, you should definitely use them.

There are pawns and rings for up to four players. Play goes fairly quickly with one or two children, especially if you skip the cards. If you have more than two children playing, I think the cards work well to add variety and keep everyone interested.

Five beginning readers that are similar to Bob Books come with the game. The Instructions tell you which letters to use with the game in which order, and they also explain when children should be ready for each of the readers. There’s a certificate of achievement for each level that you can complete for each child if it is meaningful to them.

Level two introduces j, long o, long i, long u, f, w, y, v, l, sh, qu, z, long e, k, x, and p. Level three concludes the system with wh, ai, ing, ar, y at the end of words, to, er, ed, oo (as in moon), ea, ie, ph, ch, ou (as in out), and ee. Pronunciation of each phonogram is demonstrated for each level on free videos on the publisher’s website. While all phonograms are not covered, you can combine letters yourself to introduce additional phonograms or even words.

Play begins with the letters s, a, and m. Then you introduce the letters r, n, t, o, and d, one at a time. It continues in this fashion introducing only the long sound of a in level one, saving the other long vowels for level two. You can easily use Ring Around the Phonics as a supplement with other phonics programs, introducing phonograms in the same sequence as that program. (The sequence recommended by Ring Around the Phonics is actually similar to that of many other programs.)

It will take a minute to prepare for play by selecting and applying the letters to be learned or practiced each game. You can select uppercase, lowercase, or a mix of both depending upon what has been taught.

I tried the game with my four-year-old granddaughter who already knows sounds of most of the letters and can identify all upper-case letters. I introduced lower case letters with the game as we started with the letters s, a, t, and m. The novelty of the game and the introduction of lower-cases made the game interesting enough that we skipped the green and blue cards. My granddaughter loved helping to put the letters on the board, quickly grasped the lower-case concept, and enjoyed playing the game enough that she is looking forward to playing again.