Teach Your Child to Read in 100 Easy Lessons 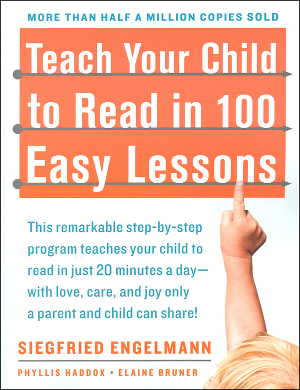 This phonics-based reading program is based on the Direct Instruction method developed from a great deal of research. This volume has adapted the method for use in the home with young children who have not yet had any reading instruction. Because it uses an unusual orthography (formation of letters to represent the various sounds) it would probably be confusing to use with a child who has already begun reading instruction in another method.

Teach Your Child… uses forty-four different letter formations to create a regular alphabet to simplify the decoding process for beginning readers. This eliminates problems such as the different sounds of the letter "t" when used alone or in conjunction with the letter "h" (e.g., "t" as in tan and than). Some letters, such as "long e" simply appear with the macron (long mark line) over the letter. Others join two letters such as the "th" to illustrate that sound. Miniature letters indicate those that are silent.

The system presented here does not attempt to provide a regular symbol for every possible sound. The authors feel that it is important for students to recognize that irregularities will appear in words such as "to." They include a few such words in the text, then expect that those remaining can be dealt with after the transition has been made to the use of the normal alphabet. (The transition begins in lesson seventy-five.)

Each lesson is very carefully scripted (telling the teacher what to say at each step) and controlled to prevent any confusion. [Cathy's note: While confusion might be a problem in a large group of children, I think it is quite easy to identify and deal with any confusion when dealing with only one child. Because of this, I am not convinced that sticking to the script is as crucial as the authors suggest. However, parents who lack confidence will likely the script very helpful.]

Everything necessary for instruction is contained in this single volume, including words, sentences, and stories for reading practice. Because the program is written for instructing young children, the words introduced at the end of the program are on a level young children will understand. A few pages at the end of the book provide suggestions for covering additional phonetic sounds along with suggested books for reading. You are likely to find that your child will not need any other program to learn how to decode the remaining sounds, but can easily learn them as you read real books with them. If you feel you would like to check your child's accomplishments against a more comprehensive phonics program, you might review Phonics Pathways or Noah Webster's Reading Handbook to pick up missing concepts.

Over the years, I have hesitated to recommend this book because of the "distorted" alphabet. I have not seen the need for introducing all of the supplementary letter symbols and have viewed it as an unnecessary complication. However, the reports I have received from those using the program have been mostly positive. The general opinion is that the book is much easier to use than many other reading programs, practice stories are entertaining, and the transition to the regular alphabet seems to be a fairly simple process.

Teach Your Child to Read in 100 Easy Lessons