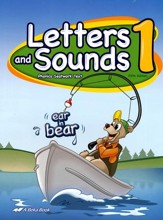 These are colorful workbooks that are not overwhelming as long as you do not push a child into reading before he or she is ready.

Letters & Sounds for 3s is a first introduction to the letters and their most common sounds. Children will trace in this book, but they are not expected to copy or write letters on their own.

The kindergarten book requires a minimal amount of writing—mostly coloring, drawing lines between things, circling, and selecting the right answer until the end of the book where they fill in some blanks. However, children are expected to be able to read three-letter, short-vowel words early in the book. Children also learn to write the letters in kindergarten.

Letters and Sounds 1 repeats much of what is covered in K, then continues with phonics instruction. Its activity pages include coloring-by-letters, matching, puzzles, and writing letters and words.

There is a test book for the first-grade course, but you should be able to judge how well your child is learning without the tests.