This is one of my Top Picks
BJU Press 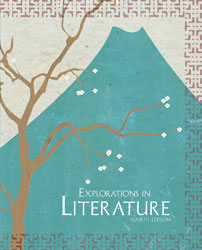 Not all literature courses are created equal. Some seem to have selected reading material to meet multicultural or social goals rather than as examples of good literature. Others seem to focus on simple comprehension questions (e.g., identify the protagonist and the antagonist) and never get into “meaty” discussion questions that really engage students.

They feature an interesting mix of reading material. Many reading selections authored by non-Christians are included both for literary value and to help students learn how to identify different perspectives authors bring to their works. However, literary analysis and enjoyment is taught from a Protestant perspective; so much so in American Literature and British Literature that those with other religious beliefs will have trouble with some of the selected readings, discussion questions, and the “Scriptural Application” part of the lessons presented in the teacher editions. Application sections at all levels almost always relate the reading selection to biblical ideas or principles.

One of the main purposes of this series is to help students progress beyond reading simply for pleasure to enjoying reading for inspiration and wisdom. Discussion questions are one of the primary tools used to make that happen.

The discussion questions are particularly good in this series, and they can be used for either oral discussion or writing assignments. At junior high level, they focus more on recall and comprehension. Fundamentals and Elements shift toward more literary analysis, helping students grasp the fundamentals of critical interpretation and recognize the literary elements at work in a piece of literature. American Literature and British Literature draw upon the literary concepts taught in earlier grades and challenge students to think critically about the pieces they read—to analyze the text, to synthesize ideas, and to evaluate ideas from a biblical worldview. For example, American Literature includes a short story “The Minister’s Black Veil” by Nathaniel Hawthorne. Among the discussion questions are the following: “In your opinion, does Hooper’s self-imposed isolation represent self-denial for the edification of others, or is it symbolic of misdirected religious zeal? Discuss Hawthorne’s theme in light of I John 1:8-10” (p. 306).

Parents and teachers need to be familiar with the readings so they can lead discussions. While students can do a certain amount of work independently, parents will need to invest some time preparing for each lesson. Teacher editions provide background, analysis, and suggested answers, so even teachers without a background in literature can teach these courses. As with all literature anthologies, parents and teachers are not expected to use every selection. Choose some from each section to fit your own goals and time schedule.

Each course includes a student text and a two-volume, spiral-bound teacher edition. Teacher editions have images of reduced student pages. Below the images of student pages and in the side margins is valuable teaching information. Also, words, sentences, or paragraphs in the reduced student pages of the teacher’s edition are highlighted in different colors to match corresponding colored margin notes for the teacher. These highlighted sections can indicate a point of discussion, a definition, an example of a literary element, or a cross-reference.

The teacher editions for British Literature provide reproducible, supplemental activity pages and teaching helps located at the back of the book. Teacher editions for Explorations, Excursions, Fundamentals, Elements, and American Literature  include a Teacher’s Toolkit CD-ROM (inside the back cover) with teacher support materials, such as worksheets, graphic organizers, reading quizzes, writing rubrics, and standardized test practice in reading and vocabulary.
Tests and answer keys for each course can be ordered separately, but subject kits for all courses include tests and answer keys along with a student text and the teacher edition.

Explorations in Literature and Excursions in Literature courses for junior high are similar in format, so these first two paragraphs describe both courses. Lessons in the teacher edition follow a format of overview, objectives, potential problems (e.g., objections to authors portraying animals as having human qualities), introductory discussion, the reading, analysis, application, and additional activities. Suggestions for journal writing are given. Vocabulary words with definitions are inserted right into the text of each piece in the student text.

There are questions at the end of each literary piece (or section of a piece for lengthier writings), and these are preceded by an insert called the “Thinking Zone.” Thinking Zones are visually-separated inserts that might take up about a third of a page. Thinking Zones highlight key literary elements and show how they have been implemented in the selection students have just read. They feel more like sidebars than instructional material although they accomplish the latter’s purpose. The thought-provoking questions that follow address literal, critical, interpretive, and appreciative elements. Each unit has a review in the student textbook. Reviews are tests that include multiple-choice, true/false, matching, and short-answer questions along with one or two essay questions.

Explorations in Literature, written for seventh grade, covers a wide range of themes while emphasizing character. Content sections are titled Courage, Nature and Man, Generosity, Our Land, Humility, and Family. While some selections are by well-known authors (e.g., Carl Sandburg, O. Henry, Charles Finney, James Thurber, and Gary Paulsen), most authors are not readily recognized. Nevertheless, both literary quality and appeal for young teens are high. Selections are primarily prose, but there is also some poetry.

See the description in the first two paragraphs under Explorations in Literature since the format of these two texts is similar. The unifying theme of this eighth-grade text is a Christian’s journey through life, including choices he must face. Illustrations from scripture appear at the end of each unit. The text continues the character emphasis of the seventh-grade book. Units are titled Choices, Friends, Viewpoints, Adventures, Discoveries, and Heroes and Villains. Some authors and writings (or excerpts) included are Ben-Hur by Lew Wallace, Little Women by Louisa May Alcott, A Christmas Carol by Charles Dickens, "The Banks of the Sacramento" by Jack London, The Princess and Curdie by George MacDonald, and "Make Me Thy Fuel" by Amy Carmichael. A short novel, In Search of Honor, is studied in the final unit; it is included within the textbook.

Suggested for grade nine, this textbook is the foundation for the study of literature throughout high school. It teaches conflict, character, theme, structure, point of view, and moral tone through both traditional and contemporary selections. Representative authors are Sir Arthur Conan Doyle, Shakespeare, Carl Sandburg, Sir Walter Scott, John Donne, and Saki (H.H. Munro). The drama Cyrano De Bergerac is also included within the text, but an optional DVD presentation of the story is available separately.

This text, suggested for tenth grade, teaches literary analysis at a more challenging level than does Fundamentals of Literature. It delves into topics such as imaginative comparison, sound and syntax, allusion and symbol, and irony through literary selections from genres such as fiction, poetry, biography, and drama. Shakespeare’s Romeo and Juliet is included for study within the text. You might want to use the optional DVD of selected scenes from a BJU Press production of Romeo and Juliet. The DVD also has the director’s explanations of what has happened leading up to each scene.

This text, written for eleventh grade, covers American literature from the colonial period up into the twenty-first century. Representative authors are William Bradford, Benjamin Franklin, Nathaniel Hawthorne, Henry David Thoreau, Herman Melville, James Thurber, Thornton Wilder, and Amy Tan. Selections are organized by historical literary periods, while addressing some of the philosophical movements that influenced literature. There is significant discussion of the worldviews reflected by authors and their works.

This edition has expanded its inclusion of American subcultures with a number of prose pieces such as an excerpt from "How the Word Began" from the Iroquois Confederacy,  "How It Feels to Be Colored Me"  Zora Neale Hurston, and "Two Kinds" by Amy Tan. Similarly, poems representing diverse cultures are included such as "Dream Variations" by Langston Hughes, "If We Must Die" by Claude McKay, "Rosa" by Rita Dove, and "Eating Alone" by Li-Young Lee.