How to Teach Your Children Shakespeare 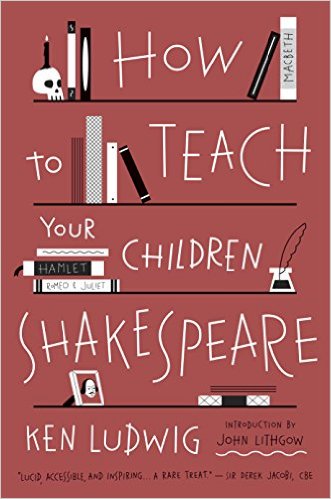 How to Teach Your Children Shakespeare might be an unusual addition to your homeschool curriculum. It offers a systematic way to help familiarize children with Shakespeare, but it is best taught in a fun, interactive, playful manner rather than as a school subject to be mastered.

The author presents 25 carefully-selected passages from various works by Shakespeare for children to memorize. He starts with short passages from the comedies A Midsummer Nights’ Dream and Twelfth Night then gradually expands the length of the passages as he continues through Romeo and Juliet, Macbeth, Henry IV, As You Like It, Henry V, Hamlet, and The Tempest.

But author Ken Ludwig’s goals are much more ambitious than simply having children memorize some passages. Along the way, children will also learn about many of Shakespeare’s stories, the key characters, the fabulous imagery he employs in his writing, literary and dramatic techniques employed by Shakespeare, the themes of many of the stories, and the incredible influence he has had on authors ever since. Sometimes, Ludwig branches out to Shakespeare-related topics such as when he introduces his readers to “two other heroes in this book,” John Heminges and Henry Condell, who published the first edition of Shakespeare’s complete plays, helping preserve eighteen of Shakespeare’s plays which would otherwise have been lost (p. 239).

As Ludwig taught his own children, he had additional, broader goals: “to give them the tools to read Shakespeare’s works with intelligence for the rest of their lives,” “to expose them to literature of such universal depth and worth that it would inspire them to want to achieve great things as they marched forward into maturity,” to share hundreds of hours with his children in shared learning that, as he says, “made our family stronger and more tolerant of one another,” to equip his children with the ability to spout a Shakespearean passage or use one in an essay, and to build their self-confidence (pp. 11-12).

I can see Christian homeschooling parents responding to these ambitious goals with comments like, “But, that’s what studying the Bible does!” Ludwig credits the King James Version of the Bible as having similar value, labeling Shakespeare and the KJV Bible as “the two great bedrocks of Western civilization in English.” But, he seems to be writing to a largely secular audience as he continues, “For many of us, Shakespeare has become a kind of Bible for the modern world, bringing us together intellectually the way religious services have traditionally done. For more than five thousand years, Moses, Jesus, and the other towering figures of the Old and New Testaments were the archetypes of our consciousness. In modern society, Hamlet and Macbeth, Juliet and Ophelia, have been added to their number” (p. 7). While Ludwig might be overselling the impact of Shakespeare on modern society, he is accurate in pointing out that those who reject the Bible often draw their iconic figures from the world of the arts—primarily literature, movies, and music. However, those who value the Bible generally still place a high value upon Shakespeare’s works, even if they might see the Bible as a better source for moral principles and eternal truths.

Ludwig’s method is relatively simple: introduce a passage in small snippets, making sure that students understand the meaning of the words and phrases as they memorize. Children should listen to the passages being recited well whether by a parent or by a recording of a Shakespearean actor. They then practice the lines frequently until they have the passage thoroughly memorized. (Recommended films and audio recordings are at the back of the book.)

Explanatory text is the bulk of the book. Parents might read some of these sections aloud with their children, but some sections are instructions for parents to absorb and apply.

For students who want to tackle more, at the back of the book are lists of 60 additional passages plus a few pages with famous epigrams such as “All that glitters is not gold” and “Something is rotten in the state of Denmark.”

I suspect that many parents might be memorizing Shakespeare right along with their children as they work through this book, perhaps discovering the beauty and depth of Shakespeare’s works for the first time themselves.

How to Teach Your Children Shakespeare