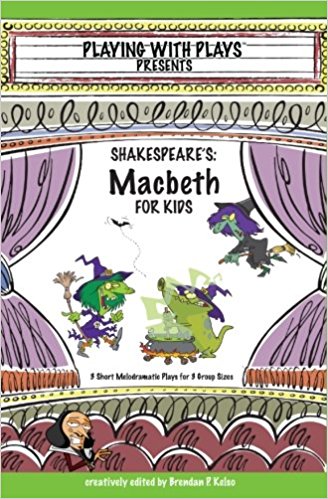 Playing with Plays Presents is a series of 16 books, each containing scripts for three versions of a short, melodramatic play, based on Shakespeare or another famous author. Scripts are adaptations written with a mixture of authentic language and modern language, all designed to make it easy for kids to grasp what’s going on and have fun with the stories.

You will choose which of the three versions of the script to use based on the size of your group. The number vary slightly from play to play, but here's an example of how it works based on Hamlet for Kids. The first version requires a minimum of 6 actors. The second version needs a minimum of 8 actors, while the third requires at least 11 actors. Scripts show which roles might be handled with one actor playing two or more different roles. For example, the first version of Hamlet for Kids needs either 6 or 7 actors since two of the seven roles can be handled by one actor if necessary. The second version has 14 characters, but one actor can double up with two roles, a second actor can handle three roles, and a third actor can handle four roles. That means you can get away with only 8 actors. If you have more kids than roles, the extras can be onlookers. The more roles in a play, the longer it takes, but all plays are relatively short, running from about 15 to 30 minutes.

Eleven of the books are based on Shakespearean plays:
Twelfth Night for Kids
Taming of the Shrew for Kids
Julius Caesar for Kids
The Tempest for Kids
Macbeth for Kids
Much Ado About Nothing for Kids
Richard III for Kids
Hamlet for Kids
Two Gentlemen of Verona for Kids
Romeo and Juliet for Kids
A Midsummer Night's Dream for Kids

The other five titles are:

Brendan P. Kelso has adapted the original stories to create these scripts. He occasionally includes lines from the original and highlights them in gray. He recommends that kids read these lines verbatim. However, for the rest of the lines he encourages creativity rather than memorization and repetition. Here is a brief section from Hamlet for Kids at the point where Laertes is dying:

Laertes: Hamlet. Listen, Claudius poisoned the wine cup and your mom drank it. He also poisoned my sword.

Laertes: Nope, we’re both going to die. The king, the king’s to blame. I am justly killed with my own treachery!

The sentences highlighted in gray are from the original, while the rest is a loose interpretation that still adheres to the original storyline. While there are some grammatical mistakes in these scripts as you might have noted, I doubt that this will bother your young actors. They will probably have great fun with the melodramatic bits when they get to be a villain such as Shere khan in The Jungle Book, or the ghost in Hamlet, or a person who gets to die in one of Shakespeare’s plays.

Kelso recommends low-budget costuming and props. You can read some ideas about costumes and props in the FAQs on Kelso’s website. You might want to watch the brief video Backyard Shakespeare on Kelso’s site. This video shows a small group of homeschoolers having a great time hamming it up and discovering that they really enjoy Shakespeare.

You can purchase a book for each student, but as long as you are not performing for a paying audience and are using the book in an educational setting, you can photocopy a script for your students. You might consider ordering books for a group directly from Kelso. If you do so, you might be able to get a group discount, and he’ll autograph the books and include Shakespeare tattoos. Check the FAQs on the website or contact Kelso for questions about other uses of the scripts.

When I first spotted Playing with Shakespeare Presents at a homeschool conference, it reminded me of how much fun we had when we tackled Shakespeare ourselves in a casual fashion, just letting the kids act it out in their own words. But our kids had to puzzle out what Shakespeare meant in the original, and it took us a bit of time to get to the point where they could act it out. Kelso makes it so much simpler, which means that you are much more likely to actually do it...and do it again and again.

Playing with Plays Presents: Shakespeare's Much Ado About Nothing

Playing with Plays Presents: Shakespeare's Richard the III for Kids