The Aesop for Children 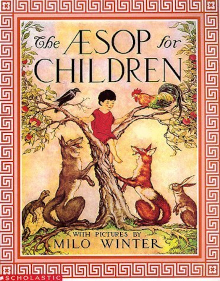 The Aesop for Children published by Scholastic is a 96-page, softcover book that presents 126 of the most popular of Aesop’s fables. This book was originally published by Checkerboard Press, Inc. in 1919, and both the original and this newer edition include lovely, detailed illustrations by Milo Winter. There are one or more illustrations on every page.

The fables are presented in a very large, readable font. The vocabulary is not dumbed down, so parents are likely to use this as a read-aloud book. For example, in the fable of “The Hares and the Frogs,” we read sentences such as “The least shadow, sends them scurrying in fright to a hiding place.” And the moral of the fable “The Wolf and the Sheep” reads, “A knave’s hypocrisy is easily seen through.” The language might be a little challenging, but it is well written and lovely to listen to—just the sort of language to which children should be exposed if you are a Charlotte Mason fan.

At least three other publishers have reprinted this book, complete with the original illustrations. For example, there are hardcover editions from Rand McNally® and Racehorse for Young Readers, and there's a softcover book from Dover Publications® that is supposed to include downloadable MP3 recordings of 42 of the fables. (Scholastic's version that I reviewed was purchased from Sonlight.) The biggest differences among all of the versions will be the covers and the quality of both the paper and the reproduction of the images.