The Wilderking Trilogy and Curriculum Guide 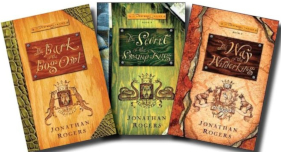 When I reviewed Jonathan Roger’s writing courses I was so unusually impressed by his insights and ideas for creative writing that I concluded he must be an excellent writer himself. I had noted that he was the author of The Bark of the Bog Owl, a book used with one of his writing courses, and The Bark of the Bog Owl is the first of his three-book series: The Wilderking Trilogy. I don’t normally review fiction, but I do review study guides for fiction that help homeschoolers use novels as part of their curriculum. So I was pleased to discover The Wilderking Trilogy: Curriculum Guide. (The guide can be purchased on its own, but it also comes as part of a discounted bundle directly from the publisher that includes the set of three books.) The Curriculum Guide is excellent, but I might have made an exception and written a review of the trilogy even if no guide existed—the Wilderking Trilogy is that good!

The three books in the trilogy are:

The three books really need to be read together. Unlike The Chronicles of Narnia, the first two books really leave you hankering for the next chapter in the story, rather than providing satisfying conclusions at the end of each book.

The trilogy works on a number of levels. It is simultaneously a coming-of-age story, a quest story, a conflict-of-civilizations story, and a rollicking adventure. The hero of the story, Aidan Errolson, is twelve at the beginning of the story, and we watch him grow and develop over the course of the trilogy into a wise young man who will eventually become the Wilderking. At the same time, we watch the development of a number of other main characters over the years, some for the better and some for the worse.

The books are not written only for a Christian audience, but those familiar with the Bible will catch the similarities to the stories about David in the Bible. Aidan kills a giant with his sling in a manner and setting very similar to that of David and Goliath. Aidan loyally serves a king who becomes jealous of him and seeks to kill him. There are a number of other parallels to David’s story, yet Aidan's story is not the same as David's. Aidan believes in God, but this is shown indirectly through a few comments. God is mentioned indirectly in the book, such as on page 16 of The Bark of the Bog Owl in the first verse of the Wilderking Chant that begins:

When fear of God has left the land,
To be replaced by fear of man;
When Corenwalders free and true
Enslave themselves and others too…

Like The Chronicles of Narnia, the story can be read by people whatever their religious beliefs, but there are layers of meaning and allusions that will be immediately familiar to those who know the stories from the Old Testament.

Rogers uses both dialogue and descriptive language to develop his characters—showing rather than telling. His characters are primarily from two groups: the civilizers (living on farms and in towns in a sort of medieval setting) and the feechiefolk (who live in the jungles, woods, and swamps and have an emotional aversion to bright and shiny metal objects used by the civilizers). The two groups seem like enemies at the beginning of the story, and many civilizers don’t even believe that feechiefolk exist. The feechiefolk have unique vocabulary words and manners of speech as well as unconventional methods of social interaction. They love to wrestle and greet each other by knocking heads together. They love to sing and have rowdy contests, and they don’t stand on ceremony. Through the course of the story, Aidan spends much of the time living with the feechiefolk, developing strong friendships and enduring loyalty between them. Unknown to both the civilizers and the feechiefolk, they actually share a common history, a fact foreshadowed throughout the series and revealed at the end of the trilogy.

Rogers wrote a number of ballads and chants that serve as both delightful literary devices and important tools for advancing the story. For instance, the Wilderking Chant reveals the primary storyline about the coming of the Wilderking. The chant is the vehicle for a prophecy that has been passed down through generations, and within the story that prophecy foreshadows Aidan's development into the Wilderking. The brave miners of Greasy Cave, who turn the tide of a battle, are memorialized in a song—and that song and their mining skills come into play at a number of other points in the story. Some chants are used to convey cultural ideas and attitudes. A good example is this snippet from the feechie love song on pages 150 and 151 of The Secret of the Swamp King:

Her brown eyes are dark like a loblolly’s bark,
Her skin is as smooth as a gator.
The one time I kissed her, she knocked me cold, mister,
But nothing could cause me to trade her.

The books can be read aloud to children as young as ages seven or eight. The independent reading level is around fourth or fifth grade and above. While the stories are written to be suitable for a younger audience, they are so well written that adults are also likely to enjoy reading them. There are layers of meaning and allusions that might slide past younger audiences while engaging older readers on entirely different levels.

The Wilderking Trilogy: Curriculum Guide has only 18 pages. You can use as many of its discussion questions and activities as you wish. The guide was written with students in grades four through six in mind, but most of it can be used with students up through eighth grade.

Two pages present 13 discussion topics, most of which are a series of linked questions. For instance, the discussion of foreshadowing begins with a brief definition. It brings up an event early in the first book and asks students what later event it foreshadows. Then it asks students to tell about other examples of foreshadowing—there are many! Many of the discussion topics have to do with the development of characters and some of the character-trait themes that run through the book.

Next are seven activities that involve science, a field trip, ecology, a feechie feast (including a "feechiesing"), various forms of creative writing, and a biblical investigation.

Twelve pages of student worksheets with instructions are next in the guide. Aside from one page that has students complete a matching activity, these are much more involved than simple worksheets. The following are a few examples. The first one lists individual lines of the Wilderking Chant and asks students to explain how they were each fulfilled in the story. Another one provides a chart for students to compare Aidan and David (from the Bible) regarding particular events and character traits. (Whether or not students believe in the Bible, this literary comparison is a worthwhile exercise.) Two of the pages help students write a feechie love song and a feechie hunting song.

Most of these worksheets are best saved until after students have read all three books. However, one of them should be given to students before they start reading. As students read, they are to fill in the columns on this worksheet as they come across parts of the story that tell what the civilizers or feechies believe about their past history—legends they have long accepted. As students read the third book, a third column is used to identify the accurate history for each legend.

The suggested discussion topics and activities are great for reinforcing and exploring some of the ideas the author tries to convey in the story. Some of them get into areas of personal application. And many of the activities should be lots of fun.

The Wilderking Trilogy tells an exciting and uplifting story while also contrasting life choices that are either virtuous or immoral. I think that’s a winning combination for children’s literature.

Bundle of the trilogy and curriculum guide - $35.40

The Bark of the Bog Owl (Wilderking Trilogy)

The Secret of the Swamp King (Wilderking Trilogy)

The Secret of the Swamp King (The Wilderking Trilogy Book 2)

The Bark of the Bog Owl (The Wilderking Trilogy Book 1)