A Beka Literature for Senior High 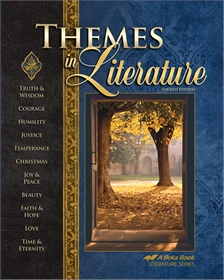 A Beka’s literature courses for high school tend toward classical works and others that have proven their worth over time. Questions tend to function primarily at the comprehension level but some questions deal with literary analysis. These courses all use at least some distinctly Christian literature.

Themes in Literature is recommended for ninth grade. Character qualities such as courage, joy, justice, and humility are the themes of selections in this ninth grade text. It features authors such as Tolstoy, Hawthorne, and Chaucer. Included in the student text are information on authors and literary devices, vocabulary lists, and discussion questions.

The World Literature course for tenth grade also requires students to read Shakespeare’s Julius Caesar and Eliot’s Silas Marner. The course has two parts, reflecting the fact that the course was originally presented in two different textbooks. The first half of the course is an introduction to literary devices. It tackles various themes such as character development in short stories or plots in suspense stories. The second half of the course presents selections in historical order with commentary on the time period and its effect on literature. It begins with the Ancient East, then travels through Classical Greece, Imperial Rome, the Middle Ages, and the Reformation and Renaissance up through what they call the Modern Age. The Modern Age section does not draw from current authors, but instead includes authors such as John Milton, Isaac Newton, and Herman Melville. The course consists of a student text, a teacher edition, a quiz and test booklet, and an answer key for the quiz and test booklet.

Eleventh graders study various genres of American literature. Among the themes for the various units are patriotism, humor and legends, the short story, drama, devotional writings, spiritual life (sermons), Romanticism, Transcendentalism, early accounts of life in the colonies, early works by American authors, biographies, autobiographies, and American poets. Along with this anthology, students will also read the book The Scarlet Letter.

Many of the selections in this book use archaic or unusual expressions, and “translations” or explanations are found at the bottom of the pages where they appear. Most readings include a brief biographical sketch of each author and questions to be used for discussion or writing assignments. At the end of each unit are some challenging composition questions and identification exercises.

You will need the teacher edition for complete lesson presentations on topics such as plot and characterization as well as for answers to textbook questions. However, if you do not want to use the teacher edition, there is a separate answer key with answers to textbook questions. There are also a quiz and test booklet and an answer key for the quiz and test booklet.

Suggested for twelfth grade, this text covers the development of English literature from the Anglo-Saxons through the twentieth century. Selections begin with Beowulf and continue through history including literary works by authors such as John Foxe, Edmund Spenser, Samuel Taylor Coleridge, Charles Dickens, Daniel Defoe, Elizabeth Barrett Browning, Matthew Arnold, T.S. Eliot, and Oswald Chambers. Background information is included in the student text. Many literary selections were chosen to reflect the spiritual state of England during those times. Both Macbeth and Pilgrim’s Progress are read along with this anthology. In addition to these two literary works, course components are the student text, a teacher edition, a quiz and test booklet, and an answer key for the quiz and test booklet.