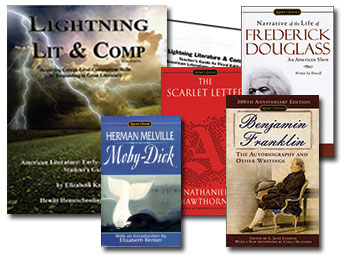 Lightning Lit & Comp courses from Hewitt Learning integrate instruction in literature and composition for students in grades seven through twelve. All of these courses use real books as the starting place, incorporating reading skills, literary analysis, and composition.

Courses for junior high are different enough from those for senior high that I have split this into two reviews. Click here to read my review of the junior high courses. Note that Hewitt Learning also has a series for grades one through three titled Lightning Literature and Composition, and you can read the review of those courses by clicking here. While all younger-level courses were written by Elizabeth Kamath, other authors are responsible for some of the high school courses.

At the high school level, semester-long courses target specific types of literature as well as Speech, and you can organize these courses as you wish. You might want to try to tie in at least some of the courses with your history when they fit.

Eight of these courses are written for use by those of all religious or non-religious persuasions. There are four additional courses for high school that have Christian content. While the non-religious courses are "Christian friendly," they do not make frequent Biblical allusions or connections as one finds in the Christian Lightning Lit courses. In the secular courses, even the optional projects for religion/Bible could be for a non-sectarian "Bible as literature" course. Nevertheless, the lessons in all of the courses raise questions of morality, motivation, ethics, and other topics that could easily lead into worldview or religious discussions, written responses, or essays. This is one aspect where parental participation or direction could be extremely valuable in helping to shape the course.

There are more high-school-level courses in the series than there are semesters of high school, so you will need to select which courses to use.

You might find that students need more composition and instruction than is provided in these courses during the first few years of high school, but by the last two years, the suggested writing assignments could be sufficient on their own if students are completing at least one or two research papers.

The eight high school level courses that are secular in their approach are:

The subtitle for these courses, Acquiring College Level Composition Skills by Responding to Great Literature, highlights the fact that these are college-prep courses with a strong emphasis on developing composition skills. For each course, students will read four unabridged books or plays (for the Shakespeare studies) along with short stories, poems, and other shorter literary works that are generally included within the student’s guides.

Hewitt’s homeschool program (in which students enroll) offers these courses as college prep English or Honors English (both requiring students to complete one course per semester) or as Basic English (requiring students to complete only one course per year). According to the instructions in the courses themselves, students write two papers for each book-length work and one paper for each shorter literary work. You can require this same level of work, but parents or teachers can also stretch out the courses, require fewer papers, or otherwise reduce the workload.

Each course has a softcover student workbook and a stapled pack of loose-leaf pages for each teacher’s guide. Each teacher’s guide explains the course, provides grading tips and checklists, has reproducible grading templates, and has answers to the comprehension questions. The teacher’s guides also include a number of pages with information that is repeated in the student’s guide: suggested schedules for either semester or year-long courses, lists of all of the options for the writing exercises, discussion questions for each work, and lists of ideas for optional projects. However, the teacher’s guides do not include the actual lesson material.

Student’s guides have introductory material on how to read various types of literature and how to write the essays required for these courses. This material repeats with little variation in every student’s guide, so much of it might be skipped once students are familiar with how the courses work.

Even though lessons within each course vary because of the nature of each literary work, the lessons all follow a consistent pattern. Each lesson begins with a brief biography of the author and some information about the work to be read. It then poses some questions for students to keep in mind as they read. Students should also jump ahead to the writing exercises, consider which sound most interesting, and then read and take notes with their selected writing exercise in mind. They will write answers to comprehension questions, although they can answer these chapter by chapter as they read or wait until they have read an entire book.

“Literary Lessons” are where most direct instruction takes place. These usually draw upon the literary work just read for examples and applications as they teach both literary analysis and composition skills. After the Literary Lesson, students tackle one or more of the writing exercises (e.g., poems, character sketches, opinion essays, literary analysis, and research papers), typically writing a one- or two-page paper for each.

In addition to the scheduled activities, students might discuss the discussion questions, tackle some of the optional projects (related to art, history, geography, religion/Bible, or science), create a vocabulary notebook, maintain a reading journal, read biographies of the authors they have encountered, give oral summaries of their reading, have family discussions about what members are reading, or watch movies that are based on literature.

Courses are designed for students to work independently, but the discussion questions might provide a very helpful interactive element. Students might provide some background to the discussion questions for parents or others who haven’t read the book but it would be more helpful if students could discuss what they have read with someone who has also read the work. Discussion questions go deeper than the comprehension level, often delving into broader philosophical issues. For example, in American Literature Mid-Late 19th Century, some questions for The Red Badge of Courage are prefaced with the statement, “Before the youth joined up, he was anxious to go to war.” It then asks, “What do you think of that attitude? Why do you think some people are eager to fight in a war?” (p. 148). In that same course, questions for The Call of the Wild get into a discussion of the philosophy of Naturalism on page 150. I would encourage you to try to have students participate in such discussions.

Other works read for that course are Uncle Tom’s Cabin; Huckleberry Finn; poems by Walt Whitman, Emily Dickinson, and Paul Laurence Dunbar; and a short story by Brett Harte. I don’t have space to list all of the works studied in each course, but I will list the selections for two other courses so that you will see the quality of the choices. British Literature: Early-Mid 19th Century uses Pride and Prejudice, Ivanhoe, Frankenstein, and Jane Eyre. Within the student’s guide there are numerous poems, including “The Rime of the Ancient Mariner” by Samuel Taylor Coleridge, “Essay on Scott” by Thomas Carlyle, and the humorous satirical piece, “Rebecca and Rowena” by William Makepeace Thackery. I’m particularly impressed with the coherence of this British Literature course. Students read Sir Walter Scott's Ivanhoe, then Thomas Carlyle's "Essay on Scott" gives them a broader understanding of both the author and the book as well as the literary styles and "superstars" of the time period.

Shakespeare’s Tragedies and Sonnets uses the plays Julius Caesar, Hamlet, Macbeth, and King Lear along with selected sonnets. The sonnets are included in the student’s guide.

The other four courses which have some religious content are:

These four courses are quite similar to the rest of the series in their layout with a few distinctions. Michael Gaunt and Elizabeth Kamath, authors of the eight courses that can be used with a secular audience, maintain a fairly consistent tone and style throughout their courses. The four Christian courses by two different authors have distinctively different tones and styles from all of the other courses.

In addition, the two world literature courses require students to read five books rather than four, although World Literature I allows students to select an autobiography from a list for the fifth book. These courses do not include poetry, articles, and other short works within the student’s guides. World Lit courses include extensive “Perspectives” articles on cultural backgrounds, and explanatory notes often precede comprehension questions for a chapter or group of chapters to assist students. In these cases, students should be sure to read the notes before reading the chapter(s). World Lit Literary Lessons sometimes discuss cultures and worldview, comparing and contrasting foreign cultures and non-Christian religions with Christianity. (These courses seem particularly good for those interested in pursuing work as missionaries.) Extensive project suggestions and additional suggested reading are provided for each unit.

American Christian Authors uses the books Can You Drink the Cup? by Henri Nouwen, A Circle of Quiet by Madeleine L’Engle, Godric by Frederick Buechner, and No Graven Image by Flannery O’Connor. In addition, students read poems by Anne Bradstreet and Wendell Berry, an essay by Walker Percy, and a short story, “The Artificial Nigger,” by Flannery O’Connor. The short story needs to be accessed from the Internet, but all of the poems and the essay are in the student’s guide. This seems an odd selection of authors and works since they seem to offer a muddled reflection of Christian thought and beliefs, but Austen explains how they were selected on page 145 of the student’s guide.

British Christian Authors has students read the books The Four Loves by C.S. Lewis, Why Does God Allow War? by D. Martyn Lloyd-Jones, Orthodoxy by G.K. Chesterton, and Gaudy Night by Dorothy L. Sayers. A lengthy selection from George MacDonald’s Phantastes: A Faerie Romance is included in the student’s guide along with poems by Gerard Manley Hopkins, and an excerpt from Amy Carmichael’s Gold Cord. Students will also need to read the essay “Tradition and the Individual Talent” by T.S. Eliot on the Internet.

Since titles and authors used for the World Lit courses are likely to be unfamiliar to most of my readers, I’m not listing them here.

Hewitt Learning sells Packs for each course that include the teacher’s guide, the student’s guide, and the required books. You can also purchase the guides separately and obtain the assigned books in some other manner.

Students read fewer authors and pieces in these courses than they would in a traditional anthology. Yet some would say that the value of reading complete books offsets this limitation, and there are shorter pieces from poetry, essays, and articles for some variety in most of the courses. Given the limited selections, the quality of the selections becomes extremely important. While I very much applaud the selections in the secular courses, I’m not as excited about the selections for the American and British Christian Authors courses.

These courses should be great for homeschoolers who need to work independently, but discussion with others will almost certainly make the courses more interesting and more productive.