Ox, House, Stick: The History of Our Alphabet 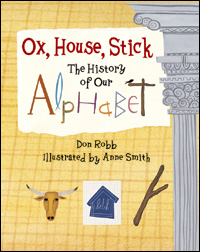 From children just learning the alphabet through adults who are avid readers, there's a fascination with the origins of our alphabet, the topic of Ox, House, Stick: The History of Our Alphabet. Even though this book has the appearance and size (48 pages) of a children's book, the content appeals to all ages..

After an initial brief introduction about the distinction between pictographs and letters, author Don Robb narrows the historical trail down to five alphabets as he traces the origin of each of our letters through Sinaitic, Phoenician, Early Greek, Classical Greek, and Roman alphabets. There are occasional interesting "sidebar" pages that address peripheral topics such as the way Romans wrote with only capital letters and no spacing or punctuation.

This is a great read aloud for children just learning to write, and it should probably be read aloud to children all through the elementary grades because of the occasional challenging vocabulary words such as "Phoenician" and "Sinaitic" as well as to help with the occasional foreign vocabulary such as "literae, alphabetum, daleth, epsilon," and "Estados Unidos."

I think it might be fun to use a book such as this immediately before introducing study of another language but especially Greek or Latin since their letters and sounds are discussed prominently in this book.

The book is illustrated in full-color throughout, but it's done with restraint to keep it from being visually overwhelming.

Note: this book is available in both hardcover or paperback editions.