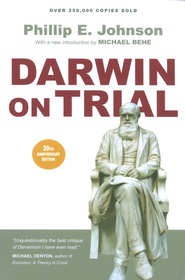 I recommend Darwin on Trial primarily to parents, although bright teens who are interested in science, philosophy, or logic should find it illuminating. Johnson tackles Darwinism head on rather than simply defend the creation model. His purpose is to prove that Darwin's ideas have no foundation in fact but are a faith position with little evidence to support them. He bolsters his arguments with scientific evidence.

Because Johnson's discussion often centers around science, this book will appeal most to those with a scientific "bent." However, non-scientists can skip the chapter on molecular evidence (the heaviest chapter, scientifically) if they get overwhelmed. Johnson studiously avoids arguments from the Bible, demonstrating that even on the evolutionists' terms and from their own philosophical perspective, the theory of evolution is insupportable.

The first edition of this book challenged the staunchest supporters of evolution to respond. A number of them have done so, although without offering irrefutable arguments. Those challenges are addressed at the end of this second edition. Some Christians will be annoyed at Johnson's dismissal of "young earth" creationism, but he does a tremendous job of addressing both scientific and philosophic issues at an understandable level. (Note: This is a book that you can give to non-Christian science teachers!)