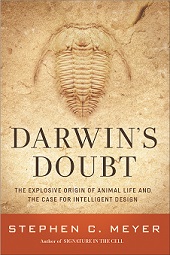 After having read Stephen C. Meyer's Signature in the Cell, I eagerly anticipated reading Darwin’s Doubt. I was not disappointed. While some ideas are repeated, each book investigates different aspects of the origins debate. Signature in the Cell deals with issues of chemical evolution and the inability of evolutionary models to come up with an explanation for the production of new information in DNA and RNA. Darwin’s Doubt focuses on one of the most significant problems, the inadequacy of Darwinian theories to explain how structural innovations arose. The Cambrian explosion has been subjected to intense analysis since it is there that scientists have observed the sudden appearance of many new life forms that had no significant precursors or intermediate forms. The sudden appearance of a “branched tree” with no common trunk or limbs stands in stark contrast to Darwin’s “tree of life” with common ancestors gradually branching out into successive life forms that arose directly from their precursors.

Meyer offers four critiques of the commonly accepted neo-Darwinian mechanism. First, the Darwinian mechanism (i.e., random mutations and natural selection) “has no means of efficiently searching combinatorial sequence space for functional genes and proteins….” Without a blueprint to follow or a designer, there is no credible explanation as to how an organism might identify and incorporate a mutated gene or new protein that would eventually become useful. Secondly, the possibilities of generating even one new gene or protein requires mathematically impossible waiting times, and new body parts would require many of these. Thirdly, “early acting mutations, the only kind capable of generating large-scale changes, are also invariably deleterious.” And lastly, mutations in genes alone are not enough to create a new body part since recent studies have discovered the vital role that epigenetic information plays in directing the formation and roles of cells (p. 411).

I found the discussion of the role of epigenetic information especially intriguing. As I recall, we used to credit genes as being the source of information, the controllers and directors of the formation of everything within a living creature. Evolutionists point to similarities in the genomes of chimpanzees and other creatures to that of human beings. Yet, epigenetic information, found in places other than the genes, is now recognized as a significant factor. Meyer points to the Pax-6 gene or its homolog that “helps to regulate the development of the eyes of fruit flies (arthropods) and those of squid and mice (cephalopods and vertebrates, respectively). Yet arthropod eyes exemplify a completely different structure from vertebrate or cephalopod lenses (ommatidia), whereas both mice and squid employ a camera-type eye with a single lens and retinal surface.” They also focus differently, follow different developmental patterns, and differ in their neural connections to the brain (p. 367). Evolutionary theory would indicate that the same or homologous genes should produce the same or homologous structures, while the reality is that these structures share purpose while working through different physical mechanisms. Epigenetic information clearly is a major factor in the differentiations. This fact certainly complicates evolutionary theory since the creation of new body parts then relies on multiple sources of information rather than only genes, and there would have to be mutations or accommodations in all the pertinent sources of information to arrive at a useful mutation.

As increasing number of scientists are recognizing the improbability of the neo-Darwinian model for explaining the origin of new body patterns, some scientists have attempted to come up with other models. Meyer explains a number of those models—self organization, natural genetic engineering, neutral evolution, evolutionary development biology, facilitated variation, symbiogenesis, and neo-Lamarckism. He shows how those models attempt to address one or more of the three primary tenets of neo-Darwinian theory—randomness, natural selection, and heredity.

Meyer concludes, as he did in Signature in the Cell, by making a case for Intelligent Design as a credible scientific approach as well as the best possible explanation for the origin of new body parts and designs.

While I’ve studied quite a bit of science, I do not work within the science professions. Because of this, I very much appreciate Meyer's clear explanations and the occasional drawing or illustration that brought me up to speed as I read. I have to admit that there were a few points where I was lost on the science, but they were rare and not critical to understanding the thrust of the argument.

For those who want to develop a better understanding of current scientific discoveries and theories regarding the origins debate, Darwin’s Doubt should prove helpful.