Faith, Science, and Reason: Theology on the Cutting Edge 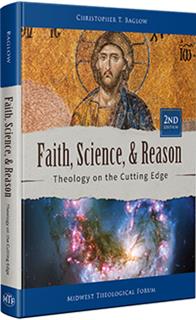 The Catholic Church has been more open to the theory of evolution than many other Christian denominations. In the past century, they’ve been extremely cautious about making definitive statements about the science of evolution, perhaps largely due to the blowback from their errors in dealing with Galileo centuries ago. However, the Catholic Church has clearly spelled out some theological parameters that influence how Catholics think about evolution. (I’ll note paragraphs from the Catechism of the Catholic Church for the following statements.) Among them, God is the creator of all things (#279, #290), God created from nothing─creation ex nihilo (#295-297), Adam and Eve really existed (#374-379), we all descend from them rather than from a larger group of people (#360), Adam and Eve sinned (#379, 390, 397-400), and the Fall (original sin) is “inherited” by everyone (#397-406). Even with these parameters, many Catholic theologians and thinkers have tried to reconcile evolution with their faith, usually by jettisoning Adam and Eve and original sin and sometimes even rejecting inerrancy and the teaching magisterium of the church.

Faith, Science, and Reason is one of the rare Catholic sources that tries to reconcile evolution while remaining faithful to what the Church teaches. Readers will have to be the judge as to how successfully it accomplishes this task. This review is of the second edition, published in 2019. Some significant changes were made from the first edition, and I will point out some of them.

The book is intended to be used as an upper-level high school text, but I suspect that many college students and adults investigating the topic as I have done will find this one of the most helpful books available. Also, there is not yet an answer key for the questions at the end of each chapter. While an answer key might eventually be available, this is a nuisance that might dissuade teachers who want to use it as a classroom text. Those using it with teens should probably wait until junior or senior year since the reader should have a foundational grounding in both faith and biological science before reading it.

The book itself is beautiful. It is hardbound with high-quality paper and gorgeous, full-color illustrations throughout. The 342-page book is slightly larger than 8.5” x 11.” The font for the text is relatively large, but the amount of text is significantly increased (at least by 20-30 percent) from the first edition. In the second edition, the text more frequently gets into deep philosophical and metaphysical discussions. The sections on miracles, the problem of evil, and the necessity of prayer in Chapter Six are an example of this. Overall, the second edition seems more challenging than the first, but the expanded content covers critical issues such as the problem of evil.

The book is divided into three parts with a number of chapters in each. Part I, “Seeing the Whole: Natural Science and Supernatural Faith,” lays the groundwork. The first three chapters in this part address the relationship between faith and science. The author, Dr. Christopher Baglow, challenges the atheist reductionist view of scientific atheism (or scientism) that claims that only what science can discover and study can be true. Atheists sometimes claim that science operates in one realm of “truth” while religion operates in a totally separate realm. Baglow shows that, on the contrary, science and religion intersect rather than remaining in their separate realms and they cannot contradict one another

Baglow says that literal creationists make a different kind of mistake about the relationship between science and religion by “ascribing to truths about the natural world a kind of ultimate importance, instead of realizing that the truths with which Scripture is primarily concerned are of a much higher order” ( p. 37). Using the extreme example of the creationist Ken Ham, Baglow categorizes all creationists into the same camp, using the term “creationist” in a pejorative fashion. I wish he would instead have tried to address the challenges of scientists (including some creationists) who raise legitimate questions about science such as problems with the Cambrian explosion, the problem of irreducible complexity presented by Michael Behe that brings into question the fundamental basis of evolution, and the lack of any viable evolutionary mechanisms for the creation of viable proteins, the building blocks of life. (See my reviews of books such as Signature in the Cell, Darwin’s Doubt, and Darwin’s Black Box that address such issues.)

Chapter Four explores the relationship between modern science and the biblical accounts of creation from the perspective of a Catholic approach to the Bible. It corrects the mistaken impression many people have that the church has always been in conflict with science. In Chapter Five, Baglow draws upon the historical record to prove that the church and many of its representatives have instead served as the patrons, proponents, and innovative leaders in scientific investigation and discovery. Chapter Six on evil, prayer, and miracles adds new material that tackles some of the most challenging questions and addresses the role of faith.

Part Two of the book, “The Mind of the Maker: Physics, Biology, and Human Origins,” encompasses Chapters Seven through Nine. Here Baglow deals with some of the evidence for the existence of God from a scientific perspective. He also introduces metaphysical arguments. For example, in a section titled, “Beauty Beyond Description: Symmetry, Modern Physics, and the Argument from Design,” he discusses how the elegance of physical laws, patterns, the existence of order, and even mathematics point to the existence of a creator.

Chapters Eight and Nine address Darwin’s Theory of Evolution, the Catholic Church’s teaching regarding evolution, an evolution-based interpretation of Genesis 1, recent scientific discoveries regarding hominins and the evolution of man, the human soul, and theological implications of human evolution. These chapters include what Baglow describes as “misunderstandings and misinterpretations” of evolution by both believers and atheists. This chapter starts to become problematic in my opinion. He addresses the topic of natural selection and “survival of the fittest” by invoking the idea of God using secondary causes based on laws implanted within nature. This approach allows for the “chance” that is an essential component of the Theory of Evolution, but it really doesn’t answer the question in a satisfying way.

Baglow rejects the idea of the “god of the gaps,” the idea that God’s intervention is a valid explanation for developments within the universe. But he runs into a problem with abiogenesis, the origin of the first life, supposedly from inorganic material. He says,

The seeming impossibility of abiogenesis ceases to be a problem if we keep in mind that the Spirit’s loving presence to creation empowers, but does not replace, natural causes. Even extremely small chances that are effectively zero can work out through divine Providence. God, who not only causes all things to be but also to act as true causes, can determine that a “vanishingly small” possibility such as life emerging will happen—not through a miracle, but through the natural order he gave to his creation to bring it about (p. 202).

There is no known mechanism for producing life from non-life built into nature, so this explanation does nothing to solve the problem; it sounds like a “god of the gaps argument.” This sort of reasoning appears from time to time. While Baglow stresses that evolution is a natural process that doesn’t require divine intervention, at the same time he explains away problems with can only be described as divine intervention to overcome physical or mathematical impossibility.

The expanded section on hominins in the ninth chapter is also problematic. He challenges the Church’s teaching on monogenesis, the belief that we are all descended from an original couple rather than from a larger population of evolved people (polygenesis). Baglow acknowledges current scientific thought that Homo sapiens emerged in Africa in one population and can be traced back to a single male and a single female. But he goes further to present the same argument you would you might hear from an atheist, saying, “this does not mean that these two mated and were the first parents of our species, nor that they even lived at the same time, nor does this indicate they were the only members of an ancestral population” (p. 223).

Discussing the huge gap between human language and the communication of all other living creatures, he says that the development of this ability “is simple enough neurologically that a slight rewiring of the brain through a few genetic mutations could have given our species the type of brains” capable of sophisticated language (p. 223). I find it impossible to conceive of any “slight rewiring of the brain” that could have raised man to the point where he becomes a rational, self-reflective creature with language capability. On top of that, whatever that change was, it would have had to happen simultaneously in both Adam and Eve or at least a few members of what Baglow believes was a larger population.

The third part of the book, “In His Image: Human Personhood, Human History, and Modern Science,” tackles questions such as what it means for man to be made in the image of God, the relationship between body and soul, what it means to be human, the consequences of original sin, and imperfections in human nature. The final chapter discusses Jesus Christ as both the origin of humanity and the culmination of human evolution that unites both human and divine natures.

Throughout the book, Baglow seems to serve first as an apologist for evolution, then secondarily as an apologist for the Catholic faith in light of evolution. He criticizes literal creationists for doing the exact opposite: first serving as apologists for the Bible, then explaining science in light of what Scripture says. In my opinion, both approaches have their problems. Nevertheless, Baglow has certainly devoted a great deal of thought and research to the issues involved. I applaud his attempts to remain faithful to church teaching, although I think he falls short on some key issues.

While, in the end I remain unconvinced of the viability of Baglow’s theory of theistic evolution, I think this is a very helpful resource for Catholics who want to learn about the subject. It certainly will expose high school students as well as adults to ideas they might never hear elsewhere─ideas that can help them sort out the relationship between faith and science and that don’t require the two to be in conflict. I applaud Dr. Baglow for his efforts toward this end since the supposed faith-versus-science conflict has turned so many people away from a life of faith.